Bringing change on the radio waves

Bringing change on the radio waves 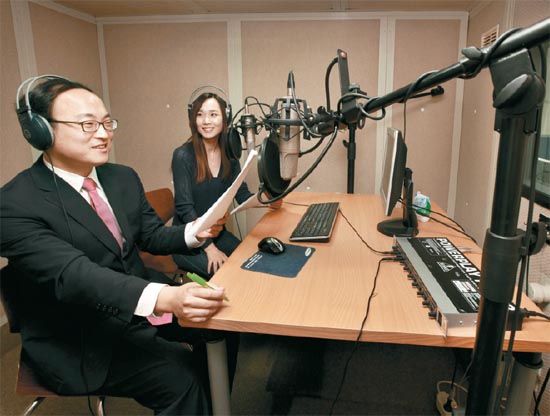 Two South Korean radio hosts record a show at Open Radio for North Korea in Mapo District, Seoul, on Oct. 12. The station, along with three other radio outlets based in South Korea, broadcast shortwave radio to North Korea to deliver news about the North and the outside world in the hopes of changing minds and, with it, the regime. By Park Sang-moon


Before defecting from his hometown of Ryanggang Province, North Korea, in 2004, Kim Myeong-jin was an avid watcher of “Requested Stage,” a long-running weekly entertainment show aired on the regime’s Korean Central Television.

Now, as a radio producer in the South, he pays homage to the show with “Requested Stage from Seoul,” a radio program modeled after the North Korean original but with a more political purpose: “enlightening” his former compatriots.

The 20-minute show, on Open Radio for North Korea, airs each Sunday on shortwave radio for people in the North. In between playing song requests, Kim reads two or three letters submitted by North Korean defectors. The letters explain why they defected, how the regime deceives its people and what life in the South is like.

Kim said the letters were directed at North Koreans in general, but particularly toward those who are still heavily influenced by state propaganda and believe the socialist revolution is still in progress, just as he did a few years ago.

“I listened to radio programs from the South for years when I was in the North, but more soft ones than obvious political propaganda programs,” Kim said. “But those soft programs also had alluring hidden messages about the South, and that process repeated 100 times, 1,000 times, lowers your resistance and strengthens your desire for knowing, and you suddenly find yourself questioning the society you are living in.”

Although there have been no signs of an Arab Spring-like unrest in North Korea, a small number of radio stations based in South Korea are working to catalyze such changes in the world’s most controlled country.

About 200,000 North Koreans, less than 1 percent of the country’s entire population, are estimated to have such radio sets, according to the stations, and that number could actually be lower in light of the regime’s reported crackdown on the devices and jamming of short radio waves from the South.

Still, the radio stations, despite their small sizes, are making an impact, says Reporters Without Borders, a global network of journalists.

“North Korea is no longer as sealed off from the outside world as it used to be,” the group said in a report issued early this month. The report described the growing availability of information in the North thanks, in part, to the radio stations.

“I don’t believe there is one unique solution to lead to a change in North Korea, but their positive impact can’t be denied,” Benjamin Ismail, the report’s author, told the Korea JoongAng Daily via e-mail.

“Defectors’ testimonies of them listening to the broadcasts and how ‘addicted’ they were to the program is already an illustration of the changes that it can catalyze,” he said.

Nine North Korean defectors found on a boat off the Japanese coast last month were reported to have said that they decided to flee the regime after listening to Open Radio for North Korea.

Three or four programs, recorded ahead of time, comprise the station’s one-hour daily program, transmitted mostly in the wee hours of the night when North Koreans can tune in with the least risk of being caught and the least jamming.

Radio Free Chosun offers a more diverse lineup of 20 programs that are produced by a staff of 14 producers including six defectors. The programs are combined into two segments that air for three hours each day. All of the station’s programs are recorded using North Korean terms and North Korean accents.

“Our programs are well tailored for North Korean listeners so they can hardly tell it is broadcast from the South,” said Kim Sung-joong, station manager of Radio Free Chosun. “It is to tear down a psychological wall to listening to radio from the outside.”

Above all, the programs produced by the stations aim to raise awareness among North Koreans of the outside world including the South. Many of the programs describe how different life outside the regime is from what they hear in the North - how humane, convenient and free life can be.

The stations also inform North Korean listeners of what is really happening inside their country. News from the regime’s state-run media is so controlled and scant that 32 percent of North Korean respondents said they wanted to hear news about North Korea more than any other news in a recent survey. The survey, conducted by InterMedia, a Washington-based research firm, polled North Korean defectors in China between late 2009 and early 2010.

Choi O-nam, a defector in her 40s, has worked as a reporter for Open Radio for North Korea for over a year, reporting on social and political changes in the North based on what she hears from her sources in the country.

The reports by Choi and others at the stations are sometimes quoted by mainstream media outlets in the South, feeding the South Korean public’s demand for rare news from the North.

“It is rewarding to know that people in the North gain awareness of what their country is really like and no longer get fooled through what I report,” Choi said.

The radio stations’ activities are not always received positively in South Korea.

Their ideological tilt - some suspect them of harboring unconditional hatred toward the North Korean regime - sometimes draws fire from progressive South Korean politicians.

“Those activities prod the North Korean regime to tighten its grip on the people and could make living conditions of North Koreans harder,” Yang said.

Yang said their activities had little impact in effecting change in North Korea because of the regime’s iron grip on information and its people, just as the authoritarian military regimes in the South were able to weather propaganda attacks from the North in the 1960s through the 1980s.

An Chan-il, a defector who now spearheads the Seoul-based World Institute for North Korean Studies, sees it differently.

His institute runs a cable broadcast service that aims to inform North Koreans of news from the outside world. He also uses human networks overseas to enlighten North Koreans residing or traveling in third countries, mostly North Korea’s elite. Changing the minds of these people, he said, was 10 times as effective as informing the North’s general public.

“The North Korean regime has loosened compared to the past, and there are many loopholes to infiltrate,” he said. “Demand for news of the outside is being created within the North.”

The Ministry of Unification closely monitors the radio stations, according to a ministry official, though the ministry declined to comment on them. The two Koreas have recently appeared to be careful about provoking each other amid fruitful discussions following last year’s two major attacks on the South. North and South Korea have held rare inter-Korean denuclearization talks twice this year, in July and last month.

The ministry official said that he was looking into the veracity of the stations’ reports of social changes in North Korea, including growing interest among North Koreans in South Korean culture and society. He added that the ministry was also studying how the North was coping with information leaked from within.

The radio stations’ reports were a good source of reference, the official said, but the government neither subsidizes them nor had any plans to in the future.

The four radio outlets depend heavily on assistance from the U.S. State Department and the National Endowment for Democracy, a U.S. organization, as well as European donors, their officials said.

Jung Yong-suk, honorary professor at Dankook University, urged the South Korean government to provide financial assistance, likening the stations to Radio Free Europe, a U.S.-backed apparatus that pitched democracy to the people of Eastern Europe and helped trigger the collapse of communist governments in the region.

Launched in Munich in 1951, Radio Free Europe recruited people who had escaped from Eastern European countries to share their experiences under communist regimes and their lives in free society.

“Those radio stations are limited in what changes it bring about in the North, but for now they are the only thing that can make an impact,” Jung said. “The [South] Korean government has to use Radio Free Europe as a benchmark and take initiative on its own.”

Ismail, the author of the Reporters Without Borders report, agreed that the radio stations needed systematic support from the government.

“As for being ‘confident,’ we must always believe that change is possible, especially when the human rights situation is as hard as [North Korea’s] situation,” he said.