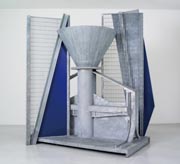 To Sunday: In this solo show by the renowned British sculptor Anthony Caro, the juxtaposition of his signature weighty works with newer, smaller pieces, illustrates the tireless development of the 87-year-old artist’s oeuvre.

Caro is best known for pushing the limits of sculpture by unifying his installation with the surrounding space and architecture rather than focusing solely on the sculpture itself.

The exhibition highlights Caro’s ability to redefine his materials - industrial metal, wood and stone - and includes table pieces made just for the exhibition and six relief works from 2010.

IN THE HEART OF THE SUN 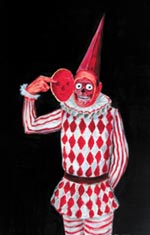 To Nov. 10: This exhibition aims to explore the concepts of “memory” and “trace” and features eight Chinese artists born after the mid-1960s.

The artists are special “because they experienced both the Cultural Revolution and capitalism when they were young,” the gallery said in a press release.

“The memory of us remains as a ‘trace’ and a ‘symptom,’” the gallery said. “It strongly affects our present and makes our future indeterminate.”

The works are from the collection of Francois Pinault, a major shareholder in Christie’s auction house and founder of business group PPR, which has as subsidiaries luxury fashion brands such as Gucci. 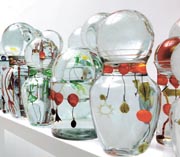 Othoniel is known for his glass works, including a permanent installation at the Palais Royal - Musee du Louvre metro station in the French capital that he designed in 2000 to commemorate the metro’s centenary.

A performance created by artist Yeesockyung, traditional dancer Lee Jeong-hwa and others will be held at 6 p.m. on Nov. 3 and Dec. 1.