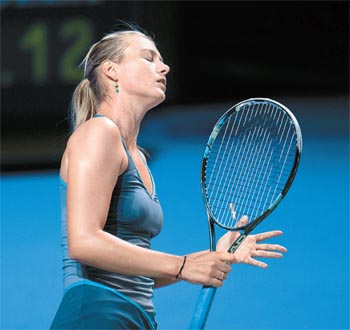 Maria Sharapova of Russia reacts during a tennis match against Samantha Stosur of Australia at the WTA championship in Istanbul, Turkey, Tuesday. Sharapova lost to Stosur 6-1, 7-5. [AP/YONHAP]

ISTANBUL - Maria Sharapova’s hopes of winning back the WTA Championship title after a seven-year interval suffered a blow when she lost her opening match to U.S. Open champion Samantha Stosur here on Tuesday.

The Russian was playing her first match in nearly four weeks after injuring an ankle in Tokyo, and her uncertainty showed as she lost 6-1, 7-5 to the Australian whom she had beaten in all of their previous nine encounters.

Sharapova, who qualified for the season-end tournament for the first time in four years, may now have to beat both Li Na and Victoria Azarenka if she is to reach the semifinals.

Sharapova had points for a 4-0 lead in the second set but lacked the consistency to capitalize. She produced a high ratio of unforced errors and six double faults, including one at 5-5 which contributed to a vital service game loss.

“It’s obviously tough to come back after a month and compete at this level,” she said.

“But at least I have given myself a chance to be here, which was a question a couple of weeks ago. And it’s good that I have a couple of matches to go. I think I have time to improve.”

Several times the former Wimbledon, U.S. Open and Australian Open champion closed her eyes in displeasure at the moments when she mistimed the ball or made wrong shot selections.

But given her hampered preparation her moderate performance was not such a surprise.

Stosur by contrast moved far better, used a containing slice backhand well to nullify many of Sharapova’s biggest blows, and often played solidly enough to make her fierce-hitting adversary try one shot too many.

She was also resolute when she had to serve out for the match.

It increases the chances that Caroline Wozniacki will finish the season as world number one for the second successive year, even though the favorite had to survive a scare and a two-hour 39-minute battle.

The top-seeded Dane went a set and a break of serve down before getting the better of Agnieszka Radwanska, the in-form Pole, by 5-7, 6-2, 6-4 in a tortuous tussle of containment and counterattack.

There were important moments when she called upon her father and coach Piotr to help work out how to overcome the durable and thoughtful Radwanska, the winner of 11 successive matches and back-to-back titles in Tokyo and Beijing to become the tournament’s last qualifier.

“He told me that I should be the one deciding where to play the ball,” she said. “And to step into court a little bit.”

He came courtside after Wozniacki had gone an early break down, and she responded to recover from 2-4 to 4-4 with steady pressure, a few more net approaches and some changes of pace with down-the-line driving.

But after Radwanska saved three successive set points at 4-5 love-40 it inspired her to lift her level, to take ten out of 11 points and to snatch the opening set.

Piotr was summoned again when Wozniacki dropped serve to go 1-2 down in the second set, at which stage matters were beginning to look grim. But then the match took an important twist.

Radwanska played an uncharacteristically poor game to drop serve, thumping the ball into the ground in anger, and going on to lose four games in a row before calling the trainer.

That brought some swivelling exercises for the upper body and a large patch of criss-crossed taping on her right shoulder.