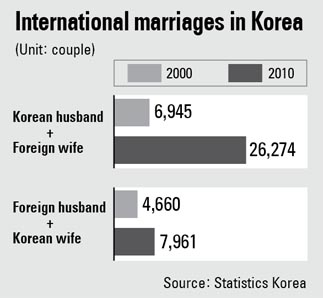 When a Vietnamese woman married a Korean man at the age of 29 through an international matchmaking agency in 2009, she thought her spouse’s curtness and unresponsiveness were due to the language barrier.

Within three months, she was pregnant, and as she lay bedridden with morning sickness, she was verbally and physically assaulted by her mother-in-law. Her husband seemed indifferent to her abuse.

It was only later that the Vietnamese woman learned that her husband had a mental disorder - a fact that had been hidden from her.

The woman ran away from home and, with the help of a multicultural center in Gyeonggi, was able to file for divorce. 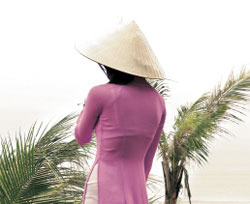 As international marriages in Korea increase, so is the number of divorces among the couples: one out of 10 divorces in the country today are by multiethnic couples.

The higher rate of failed multiethnic marriages has prompted the Ministry of Gender Equality and Family to propose requiring both parties to be present to register for a marriage license in an effort to beef up screening and protect international spouses from physical and mental anguish.

The proposal, however, must be approved by the Ministry of Justice, which has raised concerns that implementing stricter marriage registration requirements would constitute an unfair burden on Korean nationals.

Today, about 10 percent of marriages in the country are international marriages. According to Statistics Korea, 26,274 Korean men married foreign wives last year, and there was often a large age gap between the men and women, with husbands usually between the ages of 36 and 44 and the wives with an average age of 31.

Since 2000, there has been a tenfold increase in multiethnic divorces, according to the Gyeonggi Family & Women’s Research Institute, from 1,498 divorces to 11,245 divorces last year.

Some brokered international marriages end violently, as in the case of the Vietnamese woman stabbed by her husband in May.

“Although personal information is exchanged through the marriage agency, there are many instances where credibility falls in the beginning stages of the marriage and breaks the marriage,” said Lee Gi-sun from the family ministry.

In a 2009 survey of reasons for divorce conducted by the Gyeonggi Research Institute, 29.2 percent of international wives cited “personality differences.” The second most common reason was “economic incompetence,” with 20.2 percent.

Other reasons included extramarital affairs, abuse and violence, drinking, and gambling. Over 10 percent of international wives surveyed said they filed for divorce because their Korean husbands had “serious mental disorders.”

The Ministry of Gender Equality and Family said it would prioritize implementing the proposed reform measures for international spouses from the seven most popular countries for international marriages: China, Vietnam, Cambodia, the Philippines, Thailand, Mongolia and Uzbekistan. These countries require both spouses to appear when applying for marriage.

Aside from requiring both parties to be present when registering for marriage licenses, the ministry said it is also proposing more stringent paperwork.