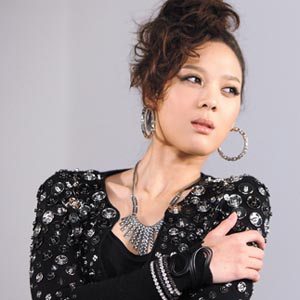 Korean R&B singer and rapper Yoon Mi-rae proved she is one of the best female rappers in Korea. Her newest single album “Get It In” topped numerous online music charts including Naver Music Chart and Olleh Music Chart once it was released on Wednesday at midnight.

According to her management company Jungle Entertainment, “Get It In,” a combination of hip-hop and electronic sounds, was produced by famed American producer !llmind, who used to work with world-famous musicians such as Eminem and 50 Cent.

Yoon, whose English name is Natasha Shanta Reid, returns with her first single in almost three years but proved she still has a wide fan base.

Yoon, well known for her powerful raps and husky voice, was recently chosen as one of the “12 best new female rappers in the world” by MTV Iggy, which specializes in global music, earlier this month.

Yoon got married to Korean rapper Tiger JK in 2007. They have a son together. She was born to a Korean mother and African-American father.

Meanwhile, Jungle Entertainment said yesterday that Yoon is scheduled to debut in the United States in December, which has been her long-running dream.