A tasting tour of Chilean vineyards

A tasting tour of Chilean vineyards 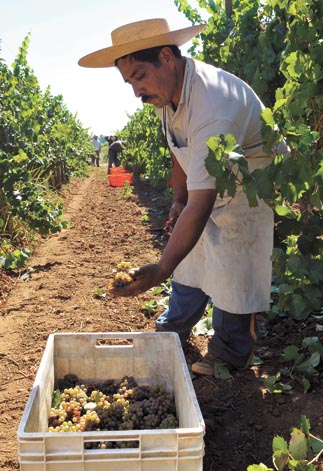 A man picks grapes at the Cono Sur vineyard in the Colchagua Valley in central Chile. Provided by Cono Sur

SANTIAGO, Chile - Chile, the longest country on the planet, boasts a variety of geographic barriers: from the Atacama Desert to the north, to the Andes Mountains to the east, the Patagonian ice fields to the south and the Pacific Ocean to the west. And that has made the Latin American country an agricultural haven - especially for wine. The country’s 15 wine-growing valleys accommodate up to 90 wineries and as I found during a week-long visit to more than a dozen of them, each winery has its own wine-producing methods, philosophy and environment. Here are six iconic wineries scattered across the central region of Chile - from Aconcagua in the north to Curico in the south.

Errazuriz boasts a vastly different landscape than the other Chilean wineries I visited. Observing the exotic semi-desert dotted with palm trees and slopes of visibly dry vineyards, it felt like I was suddenly transported to an Arabic country - perhaps Egypt. The slope’s sandy clay soil, which drains very well, and hot summer days cooled by afternoon breezes intensify the flavors and concentration of its red wines, explained winemaker Carolina Herrera.

Errazuriz is a premium winery owned by a copper-rich Chilean family that has given birth to four presidents of the Republic, two archbishops of Santiago and several diplomats and writers. Living up to its prestigious reputation, its wines - Vinedo Chadwick, Sena, Don Maximiano, Kai and La Cumbre - topped Robert Parker’s list of Chilean wines for the second year running earlier this year. In first place was Vinedo Chadwick 2007, a Cabernet Sauvignon that received the highest score of 97 points.

Traces of the winery’s more than 100-year history could be seen everywhere. Its wine cellars (many were locked due to the value of the wines inside) reminded me of a solemn monastery from the medieval period. Thanks to its seismic arch structure, the cellar had not a single bottle of wine destroyed in the fatal earthquake last year, Herrera said.

Many wineries in Chile offer horse riding, but Haras de Pirque is special in that its name honors Chile’s oldest thoroughbred breeding stud. The winery was established in 1892 in the scenic foothills of the Andes, and was still partially covered with snow when I visited. The winery, its logo and even the main building, which houses wine cellars and offices, are horseshoe-shaped.

From the entrance I was taken by a two-horse carriage through an expansive horse farm that maintains some 30 racehorses to the main building, which is surrounded by lavender and other aromatic herbs.

The winery gained recognition among Korean wine drinkers for its flagship red blend Albis, a co-creation of the Antinori family of Italy and the Matte family from Chile. The wine, which retails for around 160,000 won ($144), is on a par with other high-end Chilean wines such as Montes Alpha M, Almaviva and Sena.

The winery’s entry brand Equus in 1995 had a year-long contract with Hyundai Motor, which coincidentally produces the Equus, its top-tier sedan, for distribution to the automaker’s elite clientele.

Whenever I used to see the bicycle logo on a bottle of Cono Sur wine, I wondered what relationship the logo had to the winery. I finally got the answer during my visit to the winery, where a tour of the grounds is accomplished on two wheels. Winemaker Guillermo Sanchez Martinez told me that bicycles also symbolize the winery’s commitment to producing environmentally-friendly wines. Workers ride bicycles when commuting to the winery and to get around inside, where there are bicycles everywhere, from the entrance and amongst the vines. Cono Sur, part of Chile’s No. 1 wine group Concha y Toro, started producing organic wine in 1990 and its organic wines now account for 15 percent of its total production volume. Martinez explained that organically-grown and processed wines have less yield but the grapes are more concentrated than those grown using conventional methods. The organic method is also the best way to express the terroir, he added. The winery plants flowers in between vines to protect against predators and wraps the stems with papers laden with toxic juice made of garlic to prevent insects from climbing up to the leaves, among other organic growing techniques.

Amayna, an iconic brand from the well-known Garces Silva wine family with more than 70 years of history, is perhaps one of the youngest of the wineries I visited in Chile. Only eight years old, the land, situated close to the Pacific coastline, was purchased in 1998 and produced its first vintage in 2003. Despite its short history, the winery takes pride in the fact that its wines have garnered over 90 points in every wine rating guide so far.

Unlike most wineries that offer a hierarchy of wines varying in quality and price, Amayna produces only four varieties - sauvignon blanc, chardonnay, pinot noir and syrah - and all come in a single variety. “We don’t want to produce too many,” said Hugo Desenzani, sales director of Amayna. “We don’t blend. We just want to produce the best possible variety.”

Also impressive was a sensual wall of wine bottles set against a backdrop of blue lighting and the straight lines of wine barrels, which made for a highly pleasant walk to the tasting room at the end. The tasting room was also a work of art - with a gigantic wood installation emerging from the ceiling, a long wooden table and a nice set of calf skin stools.

Montes is the wine brand that is so popular in Korea that most Koreans instantly recognize it as Chilean. Visiting the winery, I could understand why the brand clicked so much with Koreans. The whole winery - the building, interior design and facilities - is based on feng shui, the ancient Chinese principles of nature that still have an immense influence on Koreans’ way of life. For instance, to enter the main building, which is set against a steep wine-growing slope, you need to cross a wooden bridge over an emerald-colored pond. The pond has miniature trees - indicating a hint of Japanese influence - lined up on both sides. This means the building has water at its front and a mountain at its back - a symbol of harmony and positive energy.

Based on the belief that soothing music can help wine mature, the winery plays Gregorian music 18 hours a day in the storage cellar in the basement. The music is turned off at night so the wines can “relax.” Hundreds of oak barrels are lined up on a cement stand, creating a magnificent view, which the winery’s export director Carlos Serrano compared to students who are “learning and getting better with time.”

No matter which wine shop in Korea you prefer - from a discount store to a department store - you will find Torres wines from Spain that, these days, are offered at affordable prices.

Chilean winery Miguel Torres is managed by Miguel Torres Maczassek, a fifth generation Torres winemaker who moved to Chile in 1979 to maintain its century-old winemaking tradition. That made Miguel Torres the first foreign company to support Chilean vineyard production.

One of the diverse vine-growing and wine producing projects Miguel Torres has launched so far is the sparkling rose Santa Digna Estelado Rose, the first sparkling wine made with the pais varietal. Pais was Chile’s most planted variety until it was overtaken by Cabernet Sauvignon. The fresh and citric wine came to Korea three months ago.

Miguel Torres is also one of a few wineries that run their own restaurant. One is inside the winery in the Curico Valley, enabling visitors to have a gastronomic experience while enjoying the panoramic view of the vineyard.

The prix fixe meal - consisting of a fresh garden salad finished with organic extra virgin olive oil from the winery, fish and beef - was perfectly paired with the winery’s white and red varieties. The other restaurant is in the well-heeled tourist district in Santiago, the location of hotels such as the W Santiago and Intercontinental Hotel.