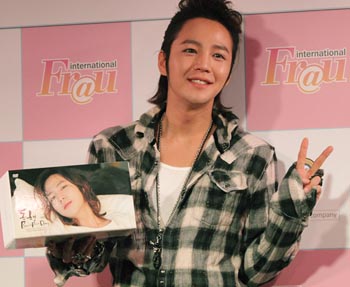 Coming off of a successful showcase of his work in Japan, actor Jang Geun-suk said on Friday that he is thinking about directing a short film next year.

Jang introduced his new video, “Budapest Diary,” at a press conference on Friday at Ginza K-Place in Tokyo and said that he will continue his filmmaking career.

“I had fun helping write the script for this video and choosing the filming locations with my director,” Jang said. “I want to show fans that I’m always working hard.”

The weeklong showcase, called “The Cri Show in Japan - Always Close To You,” started on Oct. 20 and took the 24-year-old actor to Nagoya, Osaka and Saitama, where he performed concerts, showed his video and appeared on talk shows.

“I was really happy to meet fans who were there to enjoy my show, for which I have been preparing for four months,” Jang said. “I still can’t believe I performed alone on such a big stage.”

Jang is scheduled to do another showcase in Japan at the Tokyo Dome on Nov. 26, and the venue’s 60,000 seats were sold out in five minutes after ticketing began.

Meanwhile, TreeJ Company, Jang’s agency, said that it is considering opening a branch in Japan to support Jang’s entertainment activities in that country.