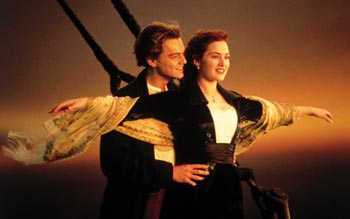 LOS ANGELES - Filmmaker James Cameron unveiled the first scenes from his new 3-D version of the mega-blockbuster hit “Titanic,” the second-biggest earner in film history, ahead of its April 2012 release.

“This a film that many people have seen, obviously, sometimes multiple times, but there is a whole generation of people who haven’t seen it in theaters,” Cameron said. “I love the 3-D, I think it’s spectacular. If I had had 3-D cameras at the time, if there had been 3-D theaters at the time, I would certainly have shot the film in 3-D.”

“Titanic” - which starred Leonardo DiCaprio and Kate Winslet as star-crossed lovers aboard the ill-fated passenger steamship that struck an iceberg in the North Atlantic and sank in 1912 - was first released in 1997.

The film earned more than $1.8 billion worldwide and 11 Oscars including best picture and a best director statuette for Cameron.

It remained the highest-grossing film of all time until Cameron’s “Avatar” shattered the record with more than $2.8 billion in worldwide receipts.

“I do believe that there is an array of 10 or 20 movies - think of the best movies of all times - that should be converted in 3-D, but it has to be done right,” Cameron said.

“I firmly believe that 3-D is an enhancement even for just normal, narrative scenes, not necessarily the action scenes,” he said.

“That feeling that you’re right there, actually with characters, enhances the emotional interaction between the audience and the film.”

The 3-D version of “Titanic” will hit theaters in North America on April 6, 2012, four days before the 100th anniversary of the ship’s doomed maiden voyage from Southampton, England, to New York.