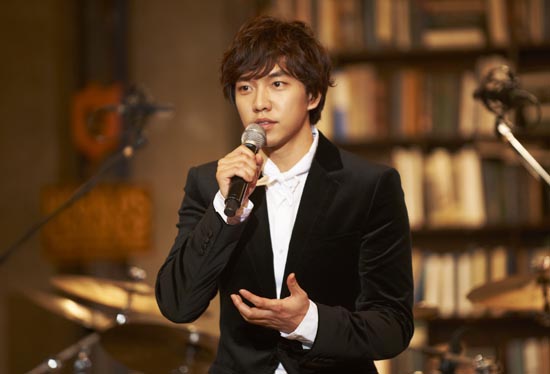 Lee Seung-gi talks to his fans during a showcase last month for his fifth album “Tonight.” Provided by Hook Entertainment


Lee Seung-gi made his singing debut as a high school freshman in 2004. Two years later, the doe-eyed boy tried his hand at acting and received rave reviews for playing the role of a spoiled only son who later becomes a father at the age of 21 in the 2006 hit drama series “The Infamous Chil Sisters.”

His continuing success as an actor next led him to join the cast of the hit reality TV show “1 Night, 2 Days” in 2007 and he has since been asked to host two shows, including “Strong Heart” on SBS.

But late last month, looking for a new challenge, Lee returned to his roots as a singer with the release of his fifth album “Tonight.” The first single off of the album, “Aren’t We Friends,” an upbeat song with a rock ’n’ roll beat, instantly topped numerous online music charts.

“With this album, I want to show more of my skills as a vocalist, but I also feel like I’m starting all over again as a singer,” Lee said during an interview after a showcase that he did to promote the album.

“To prepare, I even went back to studying with Lee Sun-hee,” he said, referring to the veteran singer who trained him when he was an aspiring professional.


Q. It’s been nearly two years since you were last active in the music scene. How do you feel about your return?

A. I feel nervous but good. I also feel a bit of regret for fans of my music because of my absence. To prepare for my return, I took lessons from Lee Sun-hee.

You are trying a different genre of music this time. What prompted that?

I used to sing traditional ballads but I wanted to show a different side of myself this time around. We tried to add spice to all the songs, as if they were band music.

Take the title track “Aren’t We Friends,” for example. Composer Bang Si-hyuk made the song for me, saying he wanted to break my long-time public image (as a model student.) I also participated in making a couple of songs and writing lyrics.

You are often characterized as a straight-edge, kind, polite young guy who had perfect grades as a student. Is that image a burden?

It used to be, but not anymore. They say that bad guys are popular these days, but now I think my image as a good boy is not bad for the diversity of the society.

How do you see yourself as a vocalist?

I still have a long way to go. To be honest, I don’t have enough time to improve my vocal technique because I’m juggling three different types of work.

But I think this is such an important chapter in my life right now and I think I need to spend more time on my voice. I want to become a signer like Lee Sun-hee.

You’re hosting the talk show “Strong Heart” on SBS and you’re also doing the reality show “1 Night, 2 Days” on KBS. Have you lost anything as a singer while doing these shows?

If you are on these shows, you need to shout all the time and it’s very fatal to singers like me because we need to protect our voices and throats. In addition to that, I have no time for vocal training. But I’ve learned a lot by doing these shows and I’ve also met a lot of good people.

You used to appear with Kang Ho-dong on the same reality and talk show, but Kang recently left the entertainment scene because of a tax evasion scandal and announced his temporary retirement in September. How did that affect you?

I don’t think anyone can fill the void he has left. I don’t even want to replace him. I just do my best. Other people around me have supported me a lot [after Kang left.]

But you’re doing such a great job on the talk show without Kang.

I learned a lot from him while we were hosting the show together over the past years. But I can’t run away and this is my work. I’m giving it my all.

When do you think you’ll do your mandatory military service?

I do have plans but it’s hard to tell you details at this point. It’s a duty for every man so I hope I can join the Army when it’s not too late.

The romantic lyrics you wrote for “Love Time” from your new album have become the talk of the town. What inspired you to write the song?

You have a huge fan base among women, from young girls to women in their 50s and 60s. How do you feel about having fans whose ages vary so greatly?

I think I have many fans who are around my mother’s age. Many of them have told me they wish their sons were successful like me. But if I were one of their sons, I wouldn’t want my mom comparing me to someone famous.