Author balances family and life in a Korean deli

Author balances family and life in a Korean deli 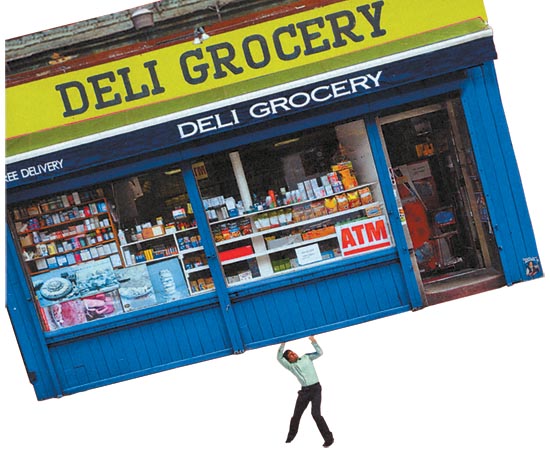 In the fall of 2002, self-proclaimed WASP Ben Ryder Howe, an editor at The Paris Review, decided, of all things, to open a deli in Brooklyn with his mother-in-law, Kay, and his Korean-American wife, Gab.

The couple, who met as undergraduates at the University of Chicago, dove into the business, thinking that the profits derived from it would enable them to buy a place of their own and move out of the basement of Gab’s parents’ house, where they had lived for a decade in order to save up for the future.

The house did come eventually, but before that, Howe wrote a hilarious yet insightful memoir about the experience.

In “My Korean Deli: Risking It All for a Convenience Store,” the author recounts his days of going to work at the glamorous, Upper East Side literary magazine by day and then to a grungy Korean deli in Boerum Hill, Brooklyn, to do night shifts, all the while dealing with the larger-than-life Kay, who he describes as “the Mike Tyson of Korean grandmothers.”

And with this self-effacing perceptiveness, the author takes us on a journey through clashing cultures, soul-crushing menial labor and, oh yes, a robbery.

Besides the charismatic Kay, the Yoda of the delicatessen world (“If owner work hard, what difference make? All store same.”), and Gab, the self-doubting go-getter, there are other fascinating characters, including the legendary writer and editor George Plimpton, who fill the pages of this delightful book.

Howe talked with the Korea JoongAng Daily via e-mail following the publication of the Korean translation of his new book.


Q. When your wife first suggested opening a deli instead of buying a home, what was the first thought that ran through your head? You wrote in the book, “She [Gab] was going to give her [Kay] back her business. And sacrifice her husband.” Do you feel you were sacrificed? 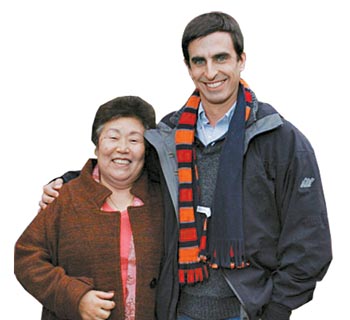 The author and his mother-in-law, Kay Provided by Jeongeun Publishing

A. When we were in our twenties, my wife and I used to talk about all the things we wanted to do with our lives - open an orphanage, move to the Sahara, become truckers - and because we didn’t have a house or anything that would tie us down, it was easy to fantasize, but also dangerous, because sooner or later something was going to stick, and my wife is the kind of person who doesn’t mess around when she decides to do something. She’s a doer. So when she said she was serious about buying a deli, one of my first thoughts was, “My god, what have you gotten yourself into? Don’t you know who you’re dealing with?” But I didn’t necessarily feel like I was being sacrificed for her; it was more like, subordinated to the overall good of the family, which seemed, based on what little I knew about Korean culture, like a very Korean thing to do. And a good thing to do.

You were living in quite a fascinating juxtaposition of two seemingly opposite worlds - The Paris Review and a deli in Brooklyn.

At first it was jarring to switch back and forth between two places so distant on the social spectrum. For instance, one night Gab and I attended a fundraiser at the review for John Kerry’s presidential campaign, which cost hundreds of dollars just to get through the door, and immediately afterward we ran over to Brooklyn and helped finish the night shift at the store. From a room full of clinking glasses and guests with limos waiting outside to a checkout counter selling snack cakes and gum - that’s quite a contrast, but contrasts are what people love about cities, and New York takes pride in having contrasts of mind-blowingly gargantuan proportions. So in a sense it felt perfectly normal.

When did it hit you that there might be an interesting book there?

After we bought the store, one night a prominent writer came in looking for me. He said, “Are you The Paris Review editor who owns this place? I assume you’re writing about it.” I said, “Well, no, actually.” And he looked at me like I was crazy, like he would kill for the material I wasn’t using. Eventually I realized that the store was one of those experiences that turn your life upside down and make you miserable in a really enriching, illuminating way, and I’d be a fool not to give writing about it at least a try.

Could you describe your schedule on an average day during that time?

I always worked night shifts that ended at 1 a.m. and would come home with a head full of Mountain Dew or bad coffee and be unable to close my eyes. After that I’d try to sleep in, which isn’t easy when you live in a house full of deli workers and someone’s always in the next room chopping watermelon or rolling change. Luckily, George [Plimpton] didn’t insist that we walk into the office at nine sharp, and the job there was more like pleasure - reading the best authors in the world is pretty nice work.

When it came time to switch worlds again, the change was often refreshing because it gave you the chance to work out a completely different side of your brain - the side that deals with tipsy customers and shoplifters and remembering the price of barbecue potato chips. If you could stay awake.

In the book, you refer to your mother-in-law as the “Mike Tyson of Korean grandmothers.” Could you elaborate on this description?

The thing that always impressed me about Mike Tyson was how much smaller he was than his opponents. Until you saw how he fought, he always looked like he should be the underdog. My mother-in-law does not look dangerous, but she is the kind of person you don’t want to compete against either because she will never be out-toughed - she’ll show up earlier, work longer, complain less, take fewer breaks. She’s a very loving, big-hearted person, but she’s also a machine.

After living so many years with Koreans, are there parts of yourself that you would consider “Korean?”

My niece and nephew call me “mini-harmony” [the Korean word for grandmother, halmeoni] because I’m always trying to stick chicken wings and fish sausages in their mouths. And sometimes I look at my apartment and wonder where so many little plastic containers came from, and why no matter how many of them I throw away, there seem to be more every day. I have a Burberry coat I like a lot, and it’s true that I have occasionally been caught walking around in white socks and flip-flops. Oh, and there’s an entire shelf of Shin Ramyun in my closet right now.

In the book, when Kay asks you, “You not like money?” you write that “one of my biggest faults as a human being is that I do not love money.” What is the biggest lesson you’ve learned from owning the deli?

The biggest lesson I’ve learned is don’t ever, ever, ever go into business with your own family. Also, if you start a small business like a deli, chances are you will have no choice but to do it with family. So if you find yourself in that situation, in order to make the best of it, you have to be flexible and open your mind to the possibility that things you had 100 percent confidence in, your core beliefs, might not be as unshakable as you thought. For me, being in a cash business was like a horror movie - all those dollar bills were like mutant parasites crawling all over my body - but eventually I had to get over it in order to function.

Do you think you portrayed the central characters in your book in a way that revealed, truthfully, who they really are as human beings? Did you feel pressure to exaggerate certain parts of their personalities to make the book more engaging?

Any subject worth writing about is going to be complicated, and I was lucky to have three characters in my life all worth writing about in Kay, Dwayne [an employee at the deli] and George, none of whom could be exaggerated because they’re all bigger than life. However, I did worry that I didn’t capture Kay’s sense of humor or her gregariousness; I worried that I was leaving out too much material about Dwayne, who could fill an entire book; and I worried that people would think I was playing soft with George because no one’s boss could possibly be that much fun. In the end, you try to capture what you think is the essence of each person - there’s no other way to do it - and hope it comes across. Someone said to me that after reading the book my wife was the only character who remained a mystery - she couldn’t figure out what made her tick. But since I can’t figure her out either, maybe that’s a case of where I nailed it.

What are your feelings about the recent release of the book in Korean? Do you think Korean audiences will respond differently than readers in the U.S.?

One of my goals with this book, especially for a Korean audience, was to do justice on a small scale to the legacy of Korean-Americans in the United States. It’s been 30 years since Korean people started coming to the U.S. in significant numbers, and while their achievements have been flat-out extraordinary, my sense is that they have not gotten the recognition they deserve, here or in Korea. Not that I was going to write a history; I just wanted to bring alive characters who could represent that group, if possible. It mattered greatly to me, maybe even more than it did to Gab and her family, who, like a lot of Korean-Americans, I think, tend to be overly modest about their accomplishments.

If you could change anything about the book, what would it be?

I always want to make changes. Even now I reread some random page and think, “Idiot! That sentence could be two words shorter!” Nothing is too small for me to get hung up on, and that’s in part because I’m a compulsive tidier-upper. (Recently, I was reading a book by Phil Rosenthal, the writer who created the TV show “Everybody Loves Raymond,” and he said, “Comedy isn’t just comedy, it’s clarity,” and I just wanted to weep because it’s so true.) This is mainly at the level of sentences, though. On a larger level, I’m pretty much OK with the book, which after working on it for five years is probably as it should be.

There has been a handful of Asian-American books in recent years that focus on the Korean-American experience. What is your opinion about them as well as about the rise in interest in the U.S. concerning Korean-American culture?

A few years ago I read a couple of books by a Korean-American sociologist named Pyong Gap Min, and those were helpful. I had a lot of questions about how my wife’s family compared to other Korean-American families like, “Why do so many Korean-American businesses stay open 24 hours?” and “Do all Korean-American families bring a suitcase full of ramen noodles with them on vacation?” In general, though, I always try to avoid reading anything that would be similar to whatever I’m working on for the simple reason that I get depressed if it’s any good.

* Education: Bachelor’s degree in philosophy from the University of Chicago

* Publications: Howe’s work has appeared in The New Yorker, New York Magazine, The Atlantic and Outside