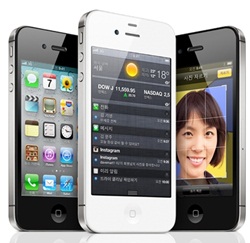 Apple’s iPhone 4S will be available in Korea from Nov. 11, paving the way for stiff competition between the nation’s top mobile service operators, among other ramifications for the domestic cell phone industry.

The California-based company announced on its Web site on Tuesday that it will launch the latest version of its hot-selling smartphone in 15 countries next week. But preorders in Korea will be available from tomorrow.

The new handset - one of the last products created by Apple founder Steve Jobs, who died on Oct. 5 - will be sold here through SK Telecom and KT.

It was KT that brought the iPhone 3GS to the local market in November 2009, when it enjoyed exclusive sales rights for Apple’s creations that lasted more than one year.

In March, SK Telecom struck a deal with Apple to sell the iPad 2 and the white iPhone 4.

KT is hoping the 200,000 owners of 3GS handsets whose two-year plans finish within this year will switch over the upgraded model, followed in trickles and spurts by the remaining 800,000 subscribers to the same plan and handset.

“Given that we were the first to bring the iPhone in and lead the smartphone boom in Korea, we have the experience and know-how, as well as the network and service capabilities needed to service the device,” said Pyo Hyun-myung, president of KT’s mobile business division.

But there are also fears that KT subscribers, who often experience connection problems with their smartphones on the company’s networks, could opt for the iPhone 4S through SK Telecom this time around.

For SK Telecom, this makes the launch of the 4S an opportunity to lure back the customers it lost to KT in 2009 to strengthen its grip on the market

“The iPhone plays such a massive role in the market,” said an SK Telecom official. “We cannot afford to back down in terms of competing [with KT] for this segment of customers.”

SK Telecom was selling Samsung Electronics’ Omnia II smartphone about two years ago, creating another potential pool of buyers for the 4S.

The imminent rollout of the latest iPhone could also retard the widespread use of the newly introduced and much-hyped 4G phones that run on ultra-fast Long-Term Evolution (LTE) technology in Korea.

As the 4S is a third-generation model and a nationwide LTE network has not yet been fully set up, companies banking on a boost in profits from this area could find their plans set back, analysts predict.

Yet it remains to be seen whether Samsung, which is seeking a ban on the new iPhone in four countries, will file a similar suit in Korea. J.K. Shin, the president of Samsung’s mobile communications division, told reporters the company is currently reviewing whether to lodge a similar suit on its home turf.