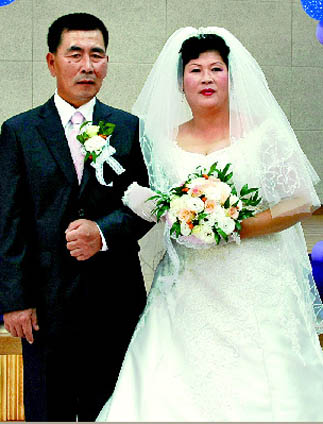 As the nuptial song resounded through the wedding hall, the middle-aged bride began to cry, smudging her eye makeup. But 150 guests began to clap enthusiastically for the union of a woman from the northernmost end of the Korean Peninsula with a man from the southernmost tip. Wiping her tears, the bride said, “Thank you.”

On Oct. 28, North Korean defector Kim Mi-ok, 47, exchanged wedding vows with Jeolla native Jang In-jok, 52, in the hall of a youth hostel in Jindo County, South Jeolla, wearing the bridal veil and billowing white dress she had always dreamed of wearing. The hall overlooks the famous Jindo coastline known for the “Moses Miracle,” a natural phenomenon that causes the waters between Jindo and Modo islands to split for about an hour two times a year.

Kim met her South Korean groom three years ago on Jeju Island, shortly after her escape from the North. Jang is a native of Gasa Island, a small island off the coast of Jindo inhabited by 400 people.

The bride is originally from Hamgyong Province, the northernmost province in North Korea bordering China. Suffering from starvation, she defected to China five years ago. However, she was promptly repatriated and faced torture and imprisonment in North Korea. Again, she escaped in the spring of 2008, this time to South Korea to fulfill her dream.

Kim made her way to Jeju Island, yearning for the “warm southern land.” However, her reality was anything but warm. While she got by on little jobs at the wharf and restaurants, she suffered from an illness she had developed over the course of her escape to the South. At that time, she met a man at church who would become her future groom. Kim describes Jang as being “a man who seems a little bit brusque but cares for me greatly.” When she was sick, she said, “He came to visit me at the hospital and took care of me, and I fell for that side of him.” It was then she decided to marry him.

After the ceremony, reporters began to bombard the bride with questions, and the protective groom intervened promptly and said, “Gee, what’re you questioning her so chaotically for?”

A concerned photographer asked Kim, “Is it okay to reveal your face even though you are a defector?”

But the bride replied with humor, “Since I am dressed up so nicely with makeup, even if the pictures are released [the North Korean State Security Agency] probably wouldn’t recognize me!”

The wedding expenses were covered by the National Unification Advisory Council, a South Jeolla youth council and the Jindo Council. An additional 3 million won ($2,653) was contributed by the guests of the wedding, including many district officials, who wanted to give the couple a head start in settling in the groom’s hometown on Gasa Island.