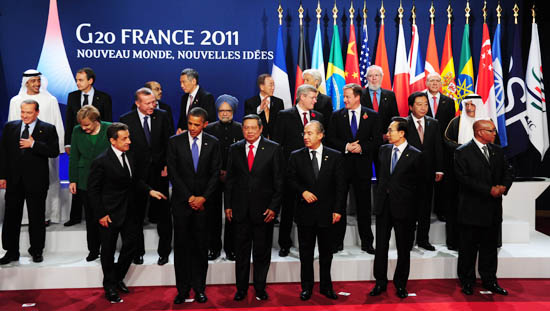 President Lee Myung-bak, second from right in front, stands with other heads of state at the Group of 20 Summit for a photo session at the Palais des Festivals in Cannes, France, on Thursday local time. They discussed ways of tackling the euro zone debt crises as the risk of a Greek default receded. [Joint Press Corps]

World stock markets rallied across the board yesterday as Greece withdrew the proposal to hold a referendum over the European bailout package, and the latest scare from the euro zone sovereign debt crisis looked more like a modern Greek drama and less like a potentially catastrophic threat for the harried country.

With the benchmark Kospi rebounding above the 1,900 mark, stocks, commodities and the euro rose, bolstered by the European Central Bank (ECB) cutting interest rates to prop up the region’s markets.

With the situation in Europe slightly defused, the Group of 20 Summit began yesterday with President Lee Myung-bak in attendance and expectations high that it would focus on mid- to long-term measures to effect an economic rebalancing act rather than seeking temporary band-aids.

The backdrop for the Cannes summit was rosier than expected yesterday as Greece’s Prime Minister George Papandreou effectively withdrew the plan to hold a referendum due to opposition by factions of his ruling Pasok party.

The country moved closer to accepting the bailout and dispelled investors’ concerns about the threat of a disorderly default that had sent the global financial market into a tailspin since Wednesday.

The ECB had more good news as it lowered the key interest rate by 25 basis points instead of freezing it as expected.

Analysts said that although this did not signal a sea change in the bank’s monetary policy, it suggested that it would be more aggressive in tackling Europe’s financial woes under the helm of new chief Mario Draghi. It was the first base rate announcement by Draghi since he took helm.

“It’s clear that his tenure is expected to be more active in trying to achieve financial stability and ward off a recession than was the case during his predecessor Jean-Claude Trichet during his eight-year tenure,” said Lee Sang-jae, an economist at Hyundai Securities.

The positive announcement from Greece and the ECB trumped the effect of Italy’s failure to approve a fiscal reform measure on financial markets.

Against this backdrop, the president put forth suggestions of how to overcome the global economic crisis on the first day of the G-20 meeting, according to Blue House sources.

Lee was said to have played a key role in drawing a consensus in major agendas during the summit, including how to frame emerging countries’ financial support for beleaguered advanced nations.