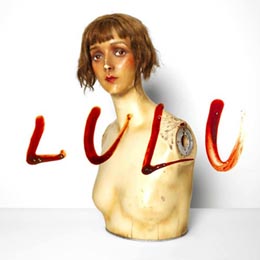 I’m still not sure if this is the worst piece of junk to be produced in album form in the last 20 years, or genius at a level so brilliant it’s beyond my mere mortal capacity to appreciate it. I’m still leaning toward the former.

This is a concept album (Warning! Warning!) based on two works by German playwright Frank Wedekind, “Earth Spirit” and “Pandora’s Box,” which tell the story of a young abused dancer’s life and relationships. It is disturbing, annoying, grating and sometimes downright unlistenable. It’s also powerful, brutal and more than an hour and a half long. Reed channels rage, lust, fear, jealousy, insecurity and a host of other emotions, layering them over pounding, riff-laden Metallica music for about half the disc. The other half is set to backward guitar parts, strings or general dissonance. The closing track, “Junior Dad,” clocks in at more than 19 minutes. This is 1960s coffee-shot beat poetry set to skull-crushing riffs or psychedelic haze. If you must listen to this, it probably makes sense only if you’re extremely high.