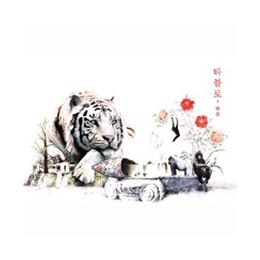 After nearly two years of shutting himself up in the aftermath of a scandal involving groundless rumors that he faked his Stanford University credentials and the break-up of his group Epik High, Tablo is back with his first solo album, “Yeolggot” (“Red Eruptions”).

Overall, the album is full of a dark and serious energy. Its melancholic melodies, set in minor keys, and his monotonic rapping signal he has apparently been struggling emotionally during his hiatus from public life.

On the title track, “Airbag,” featuring Naul, phrases like “I am probably the only island” or “I need an airbag before I bump into a gigantic sadness that is approaching” are self-explanatory. In “House,” Lee Sora, a singer who has perhaps the most unique voice in Korea - with its husky, mellow and sorrowful tone - maximizes the sorrow and despair that Tablo must have wanted to express.