Via UN, South to resume medical aid to the North

Via UN, South to resume medical aid to the North 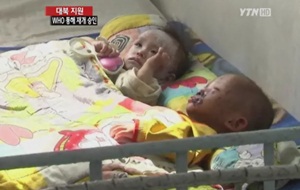 South Korea will resume sending medical aid to North Korea through the United Nations’ health body, an official said yesterday, in another sign of easing tensions on the divided Korean Peninsula.

It also comes after South Korea said it would be flexible in its North Korea policy to try to improve strained relations over the North’s two deadly attacks on the South last year.

In 2009, South Korea donated $13.12 million to the World Health Organization for humanitarian aid to the North but later withheld the execution of $6.94 million following the sinking of its warship in March 2010 that was blamed on the North.

The UN health body cannot use donated funds if a donor country withholds its execution.

South Korea sent a letter to the UN body earlier in the day to authorize the use of the remaining $6.94 million for aid to the North, the ministry official said.

South Korea “made the decision by taking into account its stance of maintaining its humanitarian aid for infants, children and other vulnerable people in the North, and the WHO’s request,” the official said.

He said the aid would be used to give basic medical supplies and medical facilities to North Korean hospitals, which outside experts have said are often ill-equipped to treat patients due to a lack of medicine and supplies.

The North has denied involvement in the sinking that killed 46 sailors as well as the shelling of Yeonpyeong Island last November that killed four South Koreans.

South Korea imposed sanctions on the North over the sinking, though it has selectively approved humanitarian and medical assistance to the communist country.

Experts from the two Koreas met recently in the North’s border town of Kaesong to discuss how to resume the excavation of an ancient royal palace site in the North.