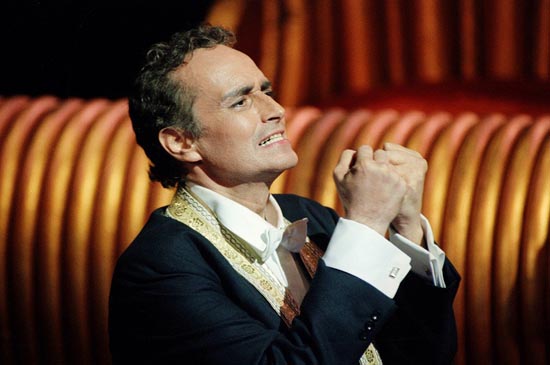 Jose Carreras, recognized as one of The Three Tenors, will be returning to Korea for performances from Nov. 23 to 24 at the Olympic Park Gymnastics Gymnasium in southern Seoul. See MUSIC. Provided by 9 Entertainment

THE GREAT 3B SERIES - BRAHMS

Today: Famed Swedish concert pianist Peter Jablonski will perform as part of “The Great 3B Series,” a three-year series honoring the music of Beethoven (in 2010), Brahms (in 2011) and Bach (in 2012). Conductor Lim Hun-jung leads the Bucheon Philharmonic.

Jablonski won the Edison Award with the Royal Philharmonic Orchestra and has worked with the Deutsches Symphonie-Orchester Berlin; and the Kirov, NHK Symphony and Czech Philharmonic orchestras.

Tomorrow: The Moscow Philharmonic Orchestra, regarded as one of the world’s finest symphonies, is set to perform a concert in Korea.

Nov. 23 and 24: Jose Carreras returns to Korea for a command performance.

Carreras gained fame as one of The Three Tenors along with Placido Domingo and Luciano Pavarotti in a series of mass concerts that began in 1990 and continued until 2003. He has also performed and recorded with artists from outside the classical music world, such as Diana Ross, Peter Maffay and Sarah Brightman.

Nov. 26: Brian McKnight comes to Korea to promote his latest album “Just Me” as part of his world tour. Recognized as a top R&B musician, McKnight has maintained his fan base through consistent album releases for the past 20 years.

Since their debut in 1991, Boyz II Men have been one of the world’s most popular R&B bands.

Dec. 10 and 11: Lee Seung-gi, who is known to perform only once a year, presents this year’s concert, the “Concert of Hope.”

Lee, a pop icon and much more, is back in the music business.

His latest single, “Age of Love,” which he wrote and composed, topped the charts upon its release, before the release of his fifth album “Tonight.”

Dec. 24 and 25: The four-member boy band 2AM is hosting a Christmas concert in December for its fans.

2AM is one of the two subgroups that branched out from the eleven-member boy band One Day; the other is 2PM.

The story of “Onegin” has been performed by major companies all over the world, including the Paris Opera Ballet, Royal Ballet, American Ballet Theater and National Ballet of China. The drama in the production brings out the emotions of the dancers while showing their polished technique and intricate partnering.

The show has music by the Gipsy Kings and John Cameron and boasts a combination of acrobatics, dancing and dueling. It is based on “Zorro,” the 2005 mock biography of the masked swordsman by Isabel Allende, and opened in London in 2008.

Jan. 19 to Feb. 5: The French-Canadian musical “Notre-Dame de Paris” is coming for its second tour to Korea since 2006.

The show, based on Victor Hugo’s masterpiece of the same name, was brought to life under the guidance of French songwriter Luc Plamondon and composer Riccardo Cocciante.

Like its literary counterpart, the musical centers on Esmeralda, a free-spirited gypsy woman, and the three men who are in love with her: Captain Phoebus, who betrays his fiancee, has just a fleeting desire for her; Archdeacon Claude Frollo’s love is closer to lust and he’s ready to break his oath with God; and his adopted son Quasimodo, the hunchbacked bell-ringer of the cathedral, to whom Esmeralda is a savior who affirms his existence.