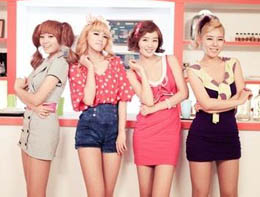 A choreographer has won a copyright lawsuit in which she alleged that a dance academy franchise used her choreography without permission.

The 31-year-old choreographer, surnamed Park, sued a dance academy franchise, whose name was not released, its owner and teachers for offering classes with choreography that Park created for the video of the girl group Secret’s hit song “Shy Boy” without permission.

Seoul Central District Court ruled on Tuesday partially in favor of the plaintiff. It ordered the academy and related personnel to remove photos and video clips with Park’s choreography from its promotional materials. The academy was also ordered to pay Park 4.84 million won ($4,300).

“As long as creative works include personal thoughts or emotions, the copyright to such works should be preserved,” the court said in its ruling. “Park’s choreography for ‘Shy Boy,’ although not entirely original, such as one move where the dancers fold both arms over the chest and mimic a beating heart, were created to fit the image of each girl group member based on Park’s ideas.”

The academy had argued that the dance moves could be used for educational purposes, but the court said in its recent ruling that if the classes were offered in exchange for money, the academy is not exempt from having to gain permission to use copyrighted work.