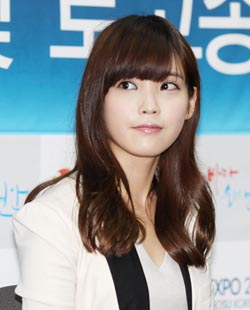 Teen singer IU will make a foray into the Japanese music market, according to EMI Music Japan. EMI Music Japan said in a press release yesterday that the 18-year-old girl will release her first album in Japan on Dec. 14. The first album will contain six tracks including her previous hits “Good Day” and “Nagging,” on which she duets with Seulong, member of boy band 2AM. The first album will also come out with a DVD that contains video clips of IU and her many different stages in Korea as a way to promote her in Japan.

EMI Music Japan, which also works with many other Korean girl groups and boy groups in Japan, described IU as an “18-year-old muse who tapped into new territory in Korean pop.” The Web site continued, “She is excellent in expressing herself with her music and she can even play the guitar. She also writes lyrics, not to mention her quality vocals.”

IU is one of a few successful solo teen signers in Korea, where the entertainment scene is dominated by girl and boy groups. The advent of IU three years ago was welcomed by a public frustrated with mass-produced idols, according to critics.

Currently, many Korean girl groups and boy groups such as Kara, Girls’ Generation, 2NE1, 2AM and 2PM are widely beloved by Japanese fans, but IU is the first solo Korean artist to debut in Japan since BoA in 2000. BoA achieved stardom status there with her unique vocals, powerful dance moves and fluent Japanese.