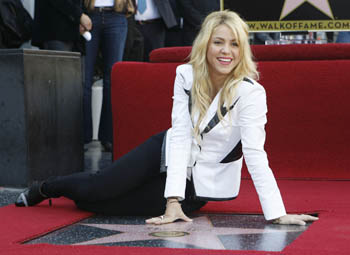 LOS ANGELES - Grammy-winning Colombian singer Shakira now has a star in the Hollywood Walk of Fame. During a Tuesday ceremony surrounded by hundreds of screaming, flag-waving fans, Shakira unveiled her sidewalk star in front of the W Hollywood Hotel on Hollywood Boulevard. It’s the 2,454th star dedicated along Hollywood’s avenue of dreams.

“This is incredible,” said the singer and activist. “I would like to thank all of you.”

Shakira said she remembered being on the boulevard as a tourist when she was 7 years old, accompanied by her mother who told her, “Shaki, one day you’ll have your own star here.”

“If someone had heard that conversation, they would have thought she was insane,” said Shakira, who was flanked by her parents at the ceremony.

The ceremony for the singer comes on the eve of her Las Vegas honor as the Latin Grammy Person of the Year.

Her popularity rose in Latin America and Spain with the 1995 release of “Pies Descalzos” and the 1998 release of her album “Donde Estan los Ladrones?” In 2001, she sold more than 13 million copies worldwide of her first English-language album “Laundry Service,” which contained the hit single “Whenever, Whereever.”

Shakira has also raised millions of dollars to fight poverty and provide education for the poor through her Pies Descalzos Foundation.