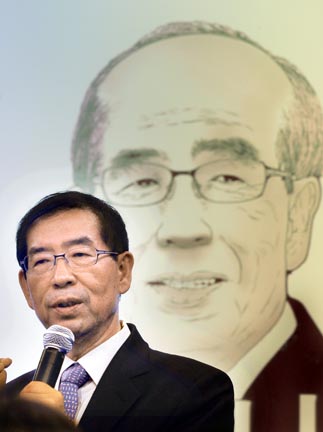 Seoul Mayor Park Won-soon gives a presentation on his 2012 budget proposal yesterday at City Hall. The mayor ended his presentation with a touch of humor, showing a caricature of himself as he might look at the end of his term, saying “I will put in my best efforts, talent and passion for the citizenry - even if it does make me bald.” [YONHAP]

“The purpose of next year’s city budget proposal is to save every penny of tax and spend it on improving citizens’ welfare, creating jobs and improving safety,” Park said at a briefing yesterday. “The most significant thing about the proposal is that it has changed the paradigm of city government policy from being construction centered to being welfare centered.”

Standing on stage in front of about 60 reporters, the mayor gave a presentation on his city budget proposal. It is unusual in Korea for a mayor to deliver a presentation for the press.

“I guess you haven’t seen a mayor give a presentation about the budget,” Park said. Pointing to the colorful graphs on the screen behind him, he said, “I prepared this infographic to help citizens understand the information more easily.”

Under the mayor’s plan, the city budget will be expanded to about 21.8 trillion won, a 5.9 percent increase from this year. The size of the budget, however, is average in comparison to the past five years. The smallest budget during that period was 19 trillion won in 2007 and the largest was 24 trillion won in 2009. Under the plan, a series of large-scale ongoing or planned construction projects launched by former Mayor Oh Se-hoon will be suspended, including construction of the Han River floating islands and the West Sea Waterway project.

“As mayor, I will be an example of a budget hawk,” Park said. To demonstrate his point, he pointed to two contrasting images on screen, an elegant lunch and a humble lunch box. “I’ve reduced my work-related expenses by 20 percent,” he said.

The deep cuts in construction projects will enable the city government to offer expanded welfare services for citizens, the mayor said, such as the construction of 80,000 public apartments, including 80 public child care centers for working moms. The mayor said that he will attract a total of 50 billion won in investments from companies in Seoul to support social entrepreneurs and create more jobs for the young generation, while the city government will kick in 30 billion won to support these programs.

Park also said the public safety budget had increased more than any other sector, up to 201.7 billion won, in the aftermath of a devastating landslide and flooding in southern Seoul this summer. He said about half of the revenue will come from an increase of 7.5 percent on average in income, property and other taxes. Under the budget proposal, a taxpayer in Seoul will pay 1.226 million won in tax, or about 80,000 won more than they pay this year. Former Mayor Oh increased taxes by 20 percent in 2008 and 0.4 percent in 2010.

Asked what he thinks about the possibility of opposition to his plan to increase taxes to expand welfare policies, Park said, “In 2005, I went to Germany, where middle-class people pay 50 percent income tax. But they were satisfied because of their trust in the government. I think it’s important to give the public a return on their tax by spending their money effectively.”

Regarding concerns that his unique governing style, which includes frequent on-site visits and meetings with members of the public, could prompt citizens to make more requests to fulfill their needs, the mayor said that he “won’t accept any violent acts or disorder without taking appropriate steps.”

The mayor ended his presentation with a touch of humor, showing a caricature of himself with a few more wrinkles and decidedly less hair.

“I’m a little worried that I’ll look like this after three years,” he said. “But I will put in my best efforts, talent and passion for the citizenry - even if it does make me bald.”