Going to the movies is now a style thing

Going to the movies is now a style thing 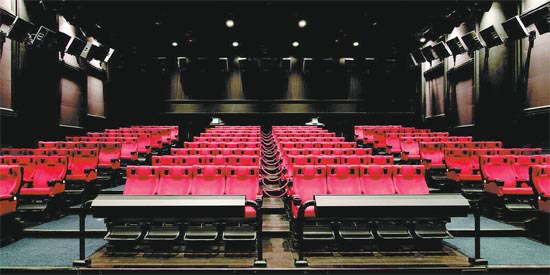 CGV Cheongdam in southern Seoul opened early this month with some premium features. Its 4DX hall, left, is designed to provide high-quality sound. The room has 84 speakers and each seat is also equipped with a personal set of speakers. [JoongAng Ilbo]


Back in the 1970s, going to a movie in Korea was considered a luxury. Since there were not many theaters and most only had one screen, it sometimes took a week to book a ticket. But since the first multiplexes opened in Korea in 1998, movie theaters have been upgrading their facilities and offering a wider variety of services in the face of increasing competition and also to make the movie-going experience special. Theaters now come equipped with stadium-style seating, concessions counters that double as cafes and “couple seats” similar to love seats.

Dinner and a movie

One of the more unique programs offers dinner and a movie - all in one location.

CGV’s Cine De Chef opened in 2007 in Apgujeong, southern Seoul, and has a restaurant and attached movie theater where patrons can dine and then relax to the movie of their choice.

The restaurant offers dishes such as pan fried salmon, gnocchi, oven-baked rack of lamb and grilled mushrooms with truffle oil, as well as a selection of wine.

If you’re still hungry while you’re in the theater, you can order a set that comes with tea, coffee, beer and snacks.

Though the experience does not come cheap, it costs up to 100,000 won ($88) per person for dinner and a movie on weekends, it continues to attract moviegoers looking for something different. Companies have even begun to book the venue for outings as an alternative to the usual hiking trip or after-hours drinking session.

CGV Cheongdam in southern Seoul offers Beats by Dr. Dre headphones, left, in its theater of the same name and a private cinema, right, that features a lounge with tea tables and couches and a 24-person theater that can be rented for private events. [JoongAng Ilbo]

When CGV Cheongdam in Sinsa, southern Seoul, opened its doors early this month in the space once occupied by the Cine City theater, a neighborhood institution since the 1980s, it had a whole new look.

Though the building still has its original facade, with its trademark black and white marquee, everything inside has been remodeled and given a slick, modern design aesthetic. The theater lobby is now filled with bakeries, cafes and shops, following the trend toward combining the multiplex experience with dining, shopping and other services.

“Cafes and restaurants pay a lot of attention to interior design, but not that many people put that kind of thought into theaters,” said Lee. “When the theater itself is trendy, however, the movie can be just one of many products on offer.”

Meanwhile, the multiplex’s attention to design and color was most noticeable in its new screening rooms.

The Veatbox Theater has striking leopard-print seats that alternate with seats draped in red, exposed brick walls and partially exposed ventilation ducts for an industrial look and feel. CGV said it has spent about 30 percent more than other theaters do on interior decor for the space.

The most eye-catching theater is the private cinema, which occupies both the 11th and 12th floors.

With a capacity of 24, the theater was built for companies and organizations willing to rent the space for private events.

The elevator opens onto a spacious lounge with couches, tea tables, bookshelves and candles.

Inside the theater, there are black couches with black and white cushions scattered throughout the room. The walls are covered in a family crest pattern and the entire atmosphere has the feel of a private party at a mansion.

The complex also has two theaters with state-of-the-art sound systems for movie fans who want to hear every word, breath and sigh.

At the 216-seat Beats by Dr. Dre Theater, audience members wear the headphones marketed by the rapper.

The headphones, which retail for around 300,000 won, became popular in the local market after swimmer Park Tae-hwan was seen wearing them at competitions.

With a set of headphones hanging next to each seat, the theater looks almost like a club or high-tech recording studio.

The idea of wearing headphones to watch a movie in a theater may seem strange, but it is actually not a bad idea (though perhaps it’s better to try it than try to imagine it).

One advantage is that the sound of the person munching popcorn next to you during a crucial scene or the annoying person talking on their cellphone is completely blocked out and you are left with the very subtle sounds of the actors inhaling or swallowing their tears.

If the idea of wearing headphones still doesn’t seem appealing, but high-quality sound is a priority, the 4DX Theater may fit the bill.

The theater is equipped with a 4DX sound system, which provides surround sound, and there are 84 speakers installed around the room (most theaters have 20 speakers). In addition, each seat has two small speakers attached at ear level on each side of the head rest with wings designed to provide head and neck support.