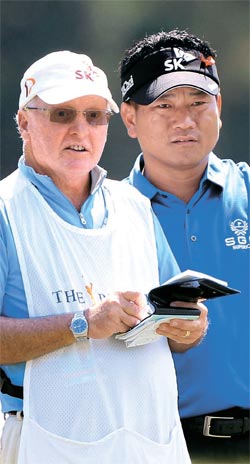 Korean professional golfer Choi Kyung-ju will have a former caddie back on his bag starting next month, having decided to part ways with a veteran caddie after eight seasons, Choi’s agency announced yesterday.

IMG Korea said Choi, better known as K.J. Choi on the PGA Tour, will be reunited with American caddie Steve Underwood. The two were together for Choi’s first PGA Tour win at Compaq Classic in New Orleans in 2002.

Choi has spent the past eight years with Andy Prodger, a 59-year-old Englishman, who also has worked for stars like Nick Faldo and Colin Montgomerie.

“Prodger said he wanted to retire from caddying, citing physical strains at his age,” an official with IMG Korea said. “And Choi understood Prodger’s situation and they decided to go their own ways.”

Choi and Prodger combined for seven PGA Tour wins. The biggest of them came in May this year at The Players Championship, dubbed the “fifth major” as the tour’s most lucrative event.

They will be together until the Presidents Cup this week in Australia.