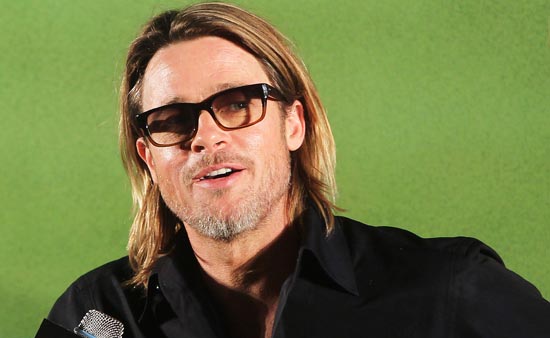 
Two decades have passed since the release of the 1991 hit film “Thelma and Louise,” but Hollywood actor Brad Pitt is still remembered as a sexy robber in the film for many Koreans.

His other role as Tristan, with flowing blonde locks in the 1994 hit “Legends of the Fall,” still remains in the minds of many Korean fans. But Pitt, who was once chosen as the sexiest men alive, didn’t rely on his good looks for his success.

Instead, he’s been trying to be taken seriously as an actor and tries to take on a different role every time he works on each project.

His two recent projects were both very different. For one, he starred in “The Tree of Life,” directed by Terrence Malick, which chronicles the origins of life. In this spiritual and serious film, Pitt played the role of an authoritative father.

His next choice was the baseball film “Moneyball,” in which he plays a baseball manager who leads a team that consistently ranks near the bottom of the league. Based on American author Michael Lewis’ 2003 novel of the same name about the Oakland Athletics baseball team, Pitt plays Billy Beane, who is designated as general manager and adopts a new system for drafting players as a way to save money. Under the new system, traditionally undervalued players with high potential are chosen regardless of their personal problems.

With the release of “Moneyball,” Pitt arrived in Seoul on Monday night for the first time to promote the film and held a press conference yesterday.

Pitt, who showed up wearing brown-tinted glasses and a black shirt, was eloquent and serious throughout the press conference.

“I never thought about sports’ economic side,” the 47-year-old actor told the media yesterday. But he soon realized many baseball teams with smaller budgets compete with rich teams in the classic David-versus-Goliath story.

“What I appreciate the most about the film is that it seems to speak about quiet victory and personal victory,” Pitt said. He added he thought victory and success are overemphasized by the media today.

When asked about his chances of winning his first Oscar early next year with “Moneyball,” Pitt said the quality and message of the film comes first and winning an award comes second.

“Award season for us usually [means] a time to get together, swap stories and drink together. I look forward to it [getting an award] if it goes that way.”

Pitt also shared one of his problems as he acted as Billy Beane. Beane has to prove his “baseball economics” theory amidst distrust and complaints from his peers. So Pitt decided to meet the real Billy Beane in person and find out what they had in common.

“We spent most of our time laughing. We have common interests for justice and a sense of fairness.” Pitt described Beane as a sharp and charismatic leader but said “I’m bit more quiet.”

Pitt said he cares the most about the story and its message when he works on a new film. If the film speaks to the time, Pitt said, popularity follows. “What we’ve been really happy about with this film is that it keeps playing weekend after weekend,” Pitt said. “And that tells us we have something more than a film, a celebrity-driven film or a subject-driven film.”

Pitt also received a question about his recent interview with an Australian current affairs show when he was in Tokyo to promote “Moneyball.” During the interview, Pitt said he wants to retire from acting when he reaches 50, three years from now.

“I’m not putting an exact deadline on my expiration date, but I do quite enjoy the producing side.” Pitt added that he hopes to develop “complex stories” into films under the current system.

In wrapping up the press conference, Pitt said how he feels about getting old as one of those handsome Hollywood actors. “Me personally, I like aging. Aging comes with wisdom. I’ll take wisdom over youth any day.” He added that being a father changed his perspective on everything around him. Pitt got married to “Friends” star Jennifer Anniston in July 2000 but their relationship ended up in divorce court in 2005. After the divorce, Pitt fell in love with actress Angelina Jolie on the set of “Mr. and Mrs. Smith” in 2005. Pitt and Jolie have six children together, three of them adopted.

Meanwhile, “Moneyball” is slated to open in Korea tomorrow at theaters nationwide. The film is directed by Bennet Miller and Aaron Sorkin adapted the screenplay from the novel.