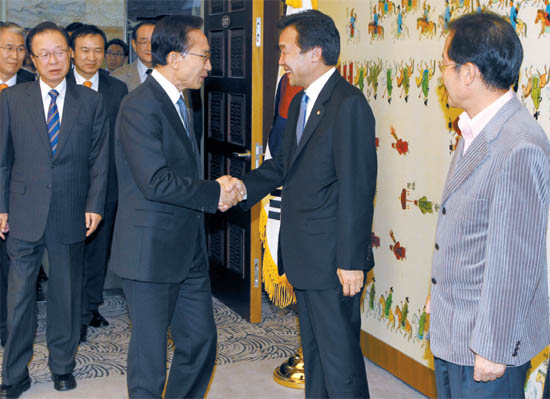 President Lee Myung-bak, third from right, shakes hands with Representative Sohn Hak-kyu, chairman of the Democratic Party, yesterday when Lee visited the National Assembly to urge the ratification of the Korea-U.S. FTA. By Ahn Seong-sik


President Lee Myung-bak yesterday promised to start a renegotiation of a contentious clause in the Korea-U.S. free trade agreement with Washington if the National Assembly ratifies it, a last-ditch attempt at compromise with the Democratic Party, which objects to one provision in the pact.

The offer was made at a rare meeting of the president and top members of the National Assembly. Representatives Hong Joon-pyo, chairman of the Grand National Party, and Hwang Woo-yea, GNP floor leader, and their Democratic counterparts Chairman Sohn Hak-kyu and floor leader Kim Jin-pyo, joined an 80-minute meeting with the president yesterday afternoon. National Assembly Speaker Park Hee-tae and the two spokesmen of the rival parties as well as senior National Assembly secretariat and Blue House officials also attended the talks.

“If the National Assembly ratifies the FTA with a recommendation for the governments of Korea and the United States to renegotiate the [investor-state dispute settlement] provision, I will demand the renegotiation to the United States within three months after the pact takes effect,” President Lee was quoted as saying by Choe Geum-nak, senior secretary to the president for public relations.

Seoul and Washington want the FTA to take effect Jan. 1, 2012, and the U.S. Congress approved it last month.

The ISD provision, the last remaining point of dispute between the two sides, would give foreign investors the right to bring a dispute in Korea to an international arbitration panel. The DP argues it will make Korea’s small companies vulnerable and demands its removal.

According to Choe, Sohn asked Lee if he had raised the issue with U.S. President Barack Obama at their meeting in Honolulu over the weekend. “I cannot say what was discussed between heads of states,” Lee was quoted as telling Sohn by Choe. “I cannot say whether there was a discussion or not.”

Lee’s proposal is based on an FTA provision that allows the two countries to establish a joint committee to address issues that arise in the course of implementing the pact after it takes effect. According to article 22.3 of section A of chapter 22 of the FTA, the joint committee “may consider amendments to this agreement or make modifications to the commitments therein.”

To reinforce the arrangement, Trade Minister Kim Jong-hoon and U.S. trade representative, Ron Kirk, exchanged letters on Oct. 30 agreeing that the committee would address “any issues raised by any party” within 90 days after the FTA takes effect, the Blue House said earlier this month. It stressed that the ISD provision can be discussed at the committee after the pact is ratified.

At the meeting, Lee also appealed for “bipartisan patriotism” from the lawmakers to end the deadlock over the ratification of the agreement.

“I am here to see what the problems are and what role I can play to resolve them,” Lee told the leaders of the ruling and opposition parties. “I am here to show my determination that I will play my role.”

Although Lee promised to start a renegotiation with Washington if the National Assembly makes the recommendation, the GNP holds the majority in the Assembly and the Lee administration and the GNP have said the ISD provision is beneficial to Korean industries, not detrimental. The Blue House reiterated the position yesterday, adding that there should be discussions at the legislature and with the business community first to decide what to do with the provision.

The Democrats expressed dissatisfaction over Lee’s proposal, although they will hold a lawmakers’ caucus today to discuss the party’s official position. According to sources, Sohn said the proposition was “unsatisfactory,” while floor leader Kim called it “disappointing.”

At the meeting with the president, Sohn insisted once again that the DP wants the ISD provision to be removed, according to his spokesman. He also warned the president not to exert pressure on the opposition party in an effort to justify railroading the FTA ratification through the Assembly by using the ruling party’s majority.

The Grand Nationals, however, said the president has made a substantial proposition.