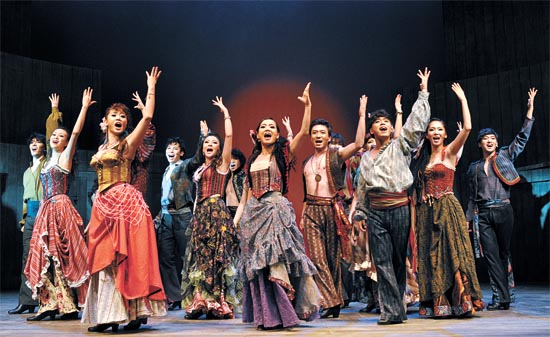 A gypsy chorus performs in “Zorro, The Musical” at the Blue Square theater in Hannam-dong, central Seoul. The musical premiered early this month and runs through January next year. Provided by Showfac


It’s not easy being a masked man with a secret identity, but actor Cho Seung-woo pulls it off with panache in the new production of “Zorro, The Musical,” which opened at the new Blue Square theater in Hannam-dong, central Seoul, earlier this month.

The star of “Jekyll and Hyde,” which ended its third run in Korea in August, is the secret weapon in the musical’s arsenal and the main draw at the box office, where it has topped the bookings since tickets went on sale late this summer.

The show has music by the Gipsy Kings and John Cameron and boasts a combination of acrobatics, dancing and dueling. It is based on “Zorro,” the 2005 mock biography of the masked swordsman by Isabel Allende, and opened in London in 2008. Allende’s book is a prequel to the original 1919 story by Johnston McCulley, “The Curse of Capistrano.”

Like the book, the musical tells the story of Don Diego de la Vega (Cho), an ordinary man who becomes a hero when he saves the lives of people suffering under the dictatorial rule of an evil army captain and Diego’s childhood friend.

The original London production won praise for its flamenco-based score, choreography and fight scenes, and the Korean production carries these elements off with aplomb as well.

Whenever the gypsy ensemble danced, many of the people in the audience followed along with the beat, tapping the armrest with their fingers, especially to the song “Djobi Djoba,” a pop-infused version of traditional flamenco music. 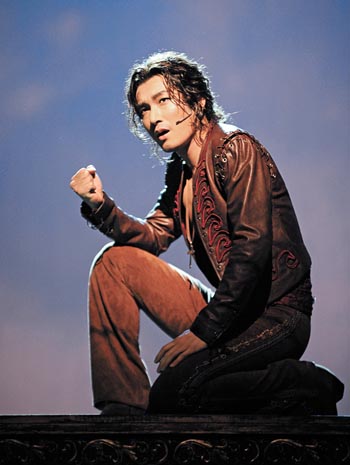 Cho Seung-woo gives a tour-de-force performance as Diego/Zorro in “Zorro, the Musical.”

But the repetitive flamenco sound also made it impossible for me to forget my frustration with the Zorro character, and each beat seemed to drill this into my head again and again.

Although Zorro should be the most charming character in the show, the production never made it clear what it was that made the timid Diego transform himself into the sleek, awe-inspiring Zorro.

Yes, Zorro does show some amazing swordsmanship and, yes, he does execute a spectacular jump from the third floor balcony onto the stage. But without a clearly developed reason for what motivates Diego to become the masked hero, the theatrics feel more like frivolous decoration.

Luckily, the musical is saved by one person. Cho’s heroic performance is enough to vanquish what is otherwise a weak script and through him, we are able to sympathize with the inarticulate Diego as he struggles with his inability to fight for justice, punish the evil leader who was once his friend and reveal himself to the woman he loves.

As Diego, Cho shows us a flesh and blood human being who is more real than his flashy alter ego. And although there are moments when he is able to infuse Zorro with some humanity as well, the line between the two characters is not always clear and I was at times unable to forget that Diego was the man behind Zorro.

The musical is also saved by its moments of humor.

When Sergeant Garcia, who works for the evil leader Ramon, asks Diego how to seduce a woman, Diego says, “Sorry, you might have to be reborn [with a different face],” a line that had the audience in stitches.

Cho gets another laugh as Zorro in a scene with Luisa, the object of his affection, after he’s saved her from captivity by Ramon. She complains to him that she almost got shot because he was late to her rescue, even though he ultimately saved her by bursting in with seven other men dressed as Zorro. In response, he deadpans, “You don’t know how hard it is to find seven Zorro outfits in such a short amount of time.”

It wouldn’t be exaggerating to say the entire show was like a one-man stand-up show, with Cho in fine form.The other thing the musical lacks is strong, memorable musical numbers, with the exception of “Djobi Djoba,” a duet for Luisa and the gypsy Inez that the cast reprises for the curtain call.

This is the first time the musical has been presented in Korea, so some hiccups are to be expected, but it is an enjoyable production overall, with Cho as the only stand-out performer.

But if it wants to become a regular part of the Korean musical theater scene, as “Jekyll and Hyde” has, then the producers of “Zorro, The Musical” will have to work to flesh out the Zorro character so that he doesn’t seem so much like Diego.