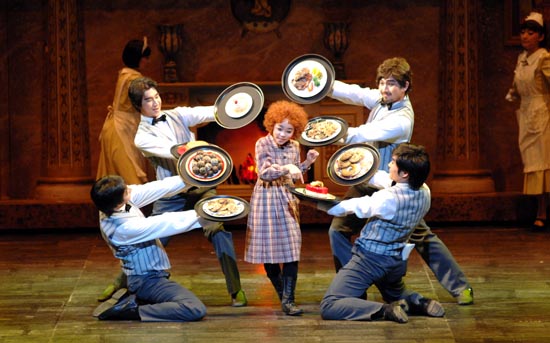 Annie is offered trays of treats at Daddy Warbucks’ mansion in “Annie,” named best musical at the Korean Musical Awards in 2007. The production returns for a holiday run Dec. 15 to 29 at the Sejong Center for the Performing Arts in central Seoul. See THEATER. Provided by the Sejong Center

Nov. 26: Brian McKnight comes to Korea to promote his latest album “Just Me” as part of his world tour. Recognized as a top R&B musician, McKnight has maintained his fan base through consistent album releases for the past 20 years.

Since their debut in 1991, Boyz II Men have been one of the world’s most popular R&B bands.

Nov. 30: Don’t feed after midnight. When the man goes to buy Gizmo, in Steven Speilberg’s “Gremlins,” the Chinese man selling it to him calls it a “Mogwai.”

The music of the Scottish post-rock superstars lilts between the more chaotic, monster version of the creature and the soft, purring type. Their music has been described as misty, haunting and ethereal. Mogwai has grown into one of the more recognizable names in their genre. The concert will feature large-scale projections during the set. This is their first time in Korea.

Dec. 1 and 2: Known for a stellar performance at the 2011 Pentaport Rock Festival, London’s soul funk band Mamas Gun is returning to Korea to promote its recently released sophomore album “The Life and Soul.”

After the release of its first album “Routes to Riches” in 2009, the band became an instant success in Japan.

Noted for his eclecticism as a soloist, Grauwels has worked with international musician such as Famed Guy Lukowski and Greek composer Yannis Markopoulos, who wrote a concerto for flute dedicated to Grauwels that was played at the Olympic Games in Athens in 2004.

Dec. 24 and 25: The four-member boy band 2AM is hosting a Christmas concert in December for its fans.

2AM is one of the two subgroups that branched out from the 11-member boy band One Day; the other is 2PM.

Metheny, the winner of 18 Grammy Awards, is one of the most critically acclaimed jazz musicians of the 1970s and ’80s and came to prominence as the leader of the Pat Metheny Group. His style combines progressive and contemporary jazz, Latin jazz, jazz fusion and more.

Jan. 19 to Feb. 5: The French-Canadian musical “Notre-Dame de Paris” is coming for its second tour to Korea since 2006.

The show, based on Victor Hugo’s masterpiece of the same name, was brought to life under the guidance of French songwriter Luc Plamondon and composer Riccardo Cocciante.

Like its literary counterpart, the musical centers on Esmeralda, a free-spirited gypsy woman, and the three men who are in love with her: Captain Phoebus, who betrays his fiancee, has just a fleeting desire for her; Archdeacon Claude Frollo’s love is closer to lust and he’s ready to break his oath with God; and his adopted son Quasimodo, the hunchbacked bell-ringer of the cathedral, to whom Esmeralda is a savior who affirms his existence.