With the financial regulator’s decision yesterday, Lone Star will officially bid farewell to Korea after making its first investment here 13 years ago.

Over the past decade the Texas-based investment fund has been at the center of news coverage as its public image quickly deteriorated from savior of the crippled Korean financial industry to a symbol of the profit-making foreign investor. 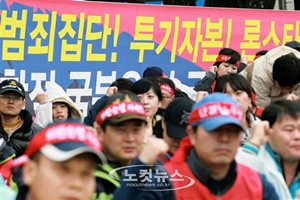 Prior to the financial crisis of the late 1990s that completely overturned Korea’s economy, Lone Star was a name unfamiliar to the general public.

Although the U.S. investor made its first investment in Korea by buying junk bonds and troubled real estate in 1998, it was when Lone Star bought Korea Exchange Bank (KEB) in 2003 that its presence became more known.

KEB suffered heavily from the late 1990s financial crisis and even saw its insolvency ratio exceed the limit. The Korean government, which was the majority shareholder at the time, was having trouble finding a bidder, foreign or at home. Particularly, many of the local financial firms were up to their neck in their own problems and the Korean government had to look abroad.

Lone Star, though, was not a financial institution but a private equity fund, and was the only bidder that showed an interest in buying KEB.

Instead of labeling it as an acquisition, the Korean government called it a successful foreign capital investment. Banking legislation limited investment funds from taking over banks. However, the Korean financial industry was faced with its second financial crisis when credit card defaults clouded the financial market. The government applied a special clause in the nation’s banking law to give the green light on KEB’s takeover.

Lone Star bought KEB in 2003 for 2.15 trillion won ($1.88 billion). However, since Lone Star put KEB up for sale in 2006, the U.S. equity fund has been involved in controversy. Issues were brought up every time it tried to unload its shares in the Korean bank.

Politicians and labor union officials asserted that the U.S. investment fund was out to make a quick profit while it had little interest in turning the bank into a competitive player in the market with sustainable growth.

Lone Star was also accused of conspiring with the Korean government to turn a sound bank into an insolvent institution while manipulating the stock value to take over the bank at a cheap price.

The fund was constantly battered with accusations of cashing in on Korea’s national wealth, tax free.

Some demanded the government slap heavy taxes on the U.S. investment fund.

Prior to the acquisition of KEB, Lone Star made a profit with its investments in a construction company and leasing company.

The same profit-making criticism also followed every time Lone Star tried to sell KEB. Lone Star invested 2.15 trillion won in buying KEB. However, it is expected to pocket a net return of more than 6 trillion won once it is sold to Hana Financial Group.

Additionally, since 2007 the Korean bank has been handing dividend payments to Lone Star which amount to more than 1.5 trillion won. Hence Lone Star has already recovered its initial investment. Currently by contract Hana Financial Group is set to purchase the majority shares Lone Star owns in KEB at over 4 trillion won.

The deadline for the contract with Hana is at the end of this month. However, it is yet to be seen if the deal, once again, will fall apart.

The U.S. buyout firm has made several attempts to sell KEB but hasn’t seen the deal go through as it was constantly under investigation from the prosecutors and financial regulators over accusations of stock manipulation. As the financial regulators delayed their approval, interested buyers changed their minds at the last minute. In some of their previous deals, it was the expansive demand from Lone Star that was believed to cause the contract to fall apart.

“Despite the public’s negative image on Lone Star, it did play a positive role in 2003 when the country was facing the second impact of a financial crisis,” said Seo Young-soo, Kiwoom Securities analyst. “As Lone Star bought KEB the market was able to somewhat stabilize.”

The analyst said the problem to consider is how the government made a fatal mistake by letting a private equity fund, which by nature is for profit, take over a bank. “In no other country can we see an investment fund taking over a bank, which is a national infrastructure,” the analyst said.