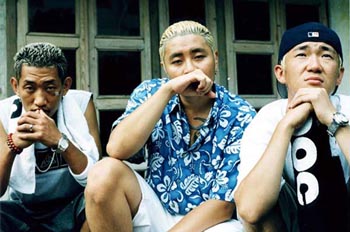 Park Jung-hwan, a former member of hip-hop group DJ Doc, said over the weekend that he has no intention of withdrawing his defamation suit against DJ Doc member Lee Ha-neul.

Park, who was only with DJ Doc for its first album in 1994, filed a lawsuit with the Youngdeungpo District Police in Seoul a week ago, saying Lee and DJ Doc member Kim Chang-ryul had defamed him on television.

Lee said Park was “rhythmically challenged,” which led to his ouster, on an episode of KBS entertainment show “Happy Together 3” that aired Nov. 3.

Park was replaced by Jung Jae-yong after the first album.

Lee apologized to Park on Kim’s radio show on Tuesday. He apologized again at a press conference on Thursday at which he also promised to remove himself from all of his television shows, including MBC talk show “Come to Play,” on which he has appeared since August 2008. Lee has also said he and Kim met with Park on Wednesday night to apologize.

Park rejected the apology in an interview with KBS show Entertainment Weekly on Saturday, saying that while it is true that he met with Lee and Kim, neither delivered a sincere apology. “We crossed the Rubicon,” Park said. “They actually told me to go all the way with the case. ... There was no apology.”

Park, who now works in the used-car business, said he was also offended by Lee’s offer to buy him a car. He added that he hoped the members of DJ Doc “learn something from this case so they can be a better group and set an example for other young singers.”