Kaesong lets Choco Pie fever get out of control

Kaesong lets Choco Pie fever get out of control 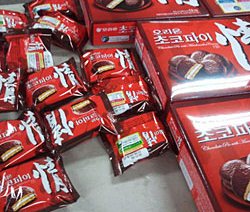 Choco Pies are so popular among North Korean workers at the Kaesong Industrial Complex that Pyongyang wants their distribution curtailed, and South Korean companies are struggling to come up with a uniform Choco Pie policy.

The chocolate-covered, marshmallow-and-cake confection is given to workers as snacks. But some workers are smuggling them out of the factories and selling them outside. The pies are viewed by some in the North as dangerous symbols of capitalism.

Recently, Pyongyang demanded that South Korean companies stop giving out pies and give cash to the workers instead.

At a meeting Nov. 10 among representatives of South Korean companies in the complex, the managers struggled to come up with a uniform Choco Pie policy. The problem, said one company representative at the meeting, was that each company gave different numbers of Choco Pies to their workers.

“The number varies greatly from company to company,” he said, “from three to four to over 10.” That inequality has apparently created discord among the 48,000 North Koreans working for more than 120 South Korean companies in the border city.

“The management should look into the actual situation and set up a recommended standard,” the company representative said.

As of now, the providing of snacks is up to the discretion of each company. But some companies outdo others in their Choco Pie largesse, and the other companies have trouble matching them.

The companies have rejected Pyongyang’s idea that the Choco Pies be stopped and cash be given instead, but haven’t received any response from the North.

The companies also expressed discontent that there was too little attention from the government or the industrial complex management to such problems in Kaesong.