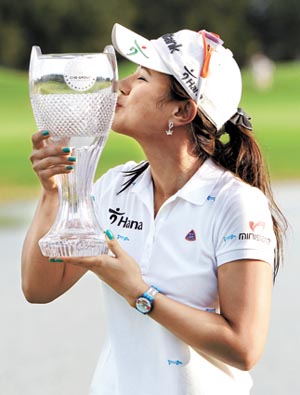 Park parred the final 10 holes in a two-under par 70 round to finish 72 holes on a 9-under par 279 with Gal, who shared the lead with Park after 54 holes, firing a 72 to share second with American Paula Creamer on 281.

Park took the $500,000 top prize and a breakthrough victory in her fourth LPGA season. The 24-year-old Asian jumped from 32nd into the top 12 on the season money list.

“It was difficult on the greens,” Park said. “Pin positions were tough. I did the same as in the other rounds, hit for the middle and get it or not get it in [for birdie].”

World No. 2 Suzann Pettersen of Norway and Korean Choi Na-yeon shared fourth on 282, one stroke ahead of Americans Michelle Wie and Cristie Kerr and World No. 1 Yani Tseng of Taiwan.

Park had cracked the top-10 only twice all season until Sunday, but a third-place effort at the Safeway Classic in August was enough to earn her a spot in the elite field for the season finale at Grand Cypress Resort.

Gal took a bogey at eight but responded with a birdie at the ninth to make the turn two strokes off Park’s pace.

Gal stumbled back with a bogey at the par-3 12th but answered with consecutive birdies to close within a stroke.

“With three or four holes left, I was getting pressure,” Park said. “I just tried the same routine and hit my targets. I tried hard.”

Gal missed a five-footer for par at the 15th and Park followed by sinking a tense four-foot par putt to seize a two-stroke edge, a margin she kept to the 18th tee.

Park was left of the green with her approach to the final green, leaving a moment of drama. Park had failed on an up-and-down on the 72nd hole at the Safeway Classic to miss a playoff three months earlier.

But Park chipped four feet from the cup and Gal missed a long birdie putt.

Both made par and Park, who said she was thirsty for an LPGA win, was showered with champagne by friends as she cried in joy.

For Tseng, who fired a final-round 74, it marked the end of a stunning season in which she won 11 titles worldwide, seven of them in LPGA events, and became the youngest male or female golfer to win five major titles at age 22.

“I never thought it was going to be like that,” Tseng said. “My goal was to win more tournaments than last year.

“I’m really proud of how much I have improved from last year. I got a better attitude, played one shot at a time, and enjoyed every tournament, every shot I played. You’ve got to have lots of fun.”