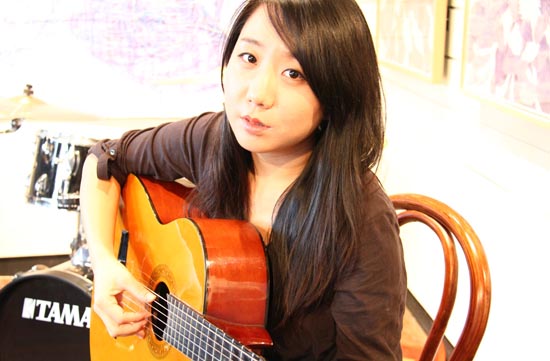 Na Hee-kyung, a singer-songwriter who currently lives and works in Brazil, poses with her guitar at a cafe near Hongik University in northwestern Seoul on Nov. 8. Provided by Sony Music Korea

For many aspiring musicians, this may sound like a dream come true. But this is actually what happened to Na Hee-kyung, a.k.a. Bossa Dabang (cafe in Korean), in the past few years.

While she was back in Seoul for an album release event earlier this month, the Korea JoongAng Daily caught up with her at a cafe near Hongik University in northwestern Seoul.

The 24-year-old singer-songwriter said she loved Brazilian music even before she could recognize it.

“I’ve been composing since I was a teenager and the rhythm that clicked with me the most was bossa nova, I realized later,” she said. “The first piece I wrote had a bossa nova beat. I didn’t even know that. I was also fascinated by world music since it is something that delivers a feeling from a place where I don’t exist.”

Na released her second album, “Hee Na,” on Oct. 11. It consists of 15 songs that are reinterpretations of songs from the early bossa nova period by Brazilian music masters such as Antonio Carlos Jobim (“How Insensitive,” “Desafinado,” “Corcovado” and others) and Baden Powell (“Samba em Preludio”). Also represented on the album is contemporary Brazilian jazz.

The album was produced by musicians that Na says may not be familiar to audiences here, but who are household names in the Brazilian music scene, including drummer Cesar Machado, guitarist Adriano Giffoni, pianist Misael da Hora and guitarist Marcelo Nami.

Her list of collaborators also includes Cesar Machado, who is currently Brazil’s hottest drummer and who has described her voice as “sweet yet highly sophisticated and tender,” and legendary jazz guitarist Roberto Menescal, who is known to be important to the founding of bossa nova.

“Menescal is the one who studied and developed bossa nova at a hideout at Copacabana Beach in the 1960s with his fellow musicians, including Gilberto Gil and Antonio Carlos Jobim,” Na said. “Menescal is the sole survivor of the clique.”

The mature musician, who speaks using formal language and the intonation of a scholar, said it was computer-generated music that initially captivated her when she was just 11 years old. She said she dreamed of becoming a specialist in digital music at the time, but as time went by she realized that all the music that clicked with her was from Brazil.

Growing up, she had studied a variety of instruments ranging from piano to guitar and drums, but said it was only after graduating from university in Korea with a degree in psychology that she was finally allowed to follow her desire to become a musician. Her parents had long been against her taking a path they thought was not as meaningful as academic accomplishment.

“Juggling both music and my studies as I went through my teenage years was really hard,” she said. “I had to make time for composing and learning to play music while maintaining a good GPA. It hurt my health.”

After graduating from college early last year, she released her debut album, “Bossa Dabang,” which contained four songs that she wrote and sung in Korean that bore a bossa nova feel harkening back to the 1960s.

Right after the album was launched in September, she flew to Rio de Janeiro, carrying 30 of her CDs.

“It was really hard to find someone in Korea who could teach me the subtle feel and rhythm that is indigenous to Brazil,” she said. “I also wanted to refresh my music career after the first album by moving to Brazil.”

She knew no one in the city and stayed at an inn run by an old Brazilian couple. At night, she toured around bossa nova clubs including Vinicius Bar to pass the CDs around. Some of the local musicians she met offered to jam with her and some even went so far as to collaborate on her album. In the meantime, she even became friends with musicians with whom she never thought she would hang out.

Na leaves for Brazil today to prepare for a tour of the country and to start work on her next album. She makes her European debut this winter.

While she plans to keep working with a bossa nova sound, she said she couldn’t guarantee that she would remain a bossa nova devotee forever.

“I think that, as a musician, I’m still in the middle of learning and soul searching,” she said.