Captain Seok honored for his courage at sea

Captain Seok honored for his courage at sea 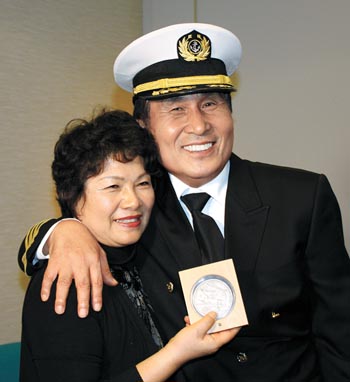 Seok Hae-kyun embraces his wife, Chi Jin-hee, after receiving the IMO Exceptional Bravery Award at Sea on Nov. 21 in London for his courage during a Somali pirate attack. [YONHAP]

The captain of a Korean freighter hijacked by Somali pirates and rescued in a naval operation, Seok Hae-kyun, received the Exceptional Bravery Award at Sea from the International Maritime Organization (IMO) yesterday.

The 58-year-old captain of Samho Jewelry was presented with the medal and certificate at an award ceremony by IMO Secretary-General Efthimios Mitropoulos in the maritime organization’s headquarters in London, in recognition of his exceptional act of bravery, risking his own life to keep his vessel and crew safe during the assault by the Somali pirates.

Some 600 representatives from 169 countries attended the award ceremony and applauded the heroic captain who was walking with a cane.

He was released from hospital earlier this month after nine months of treatment for multiple gunshot wounds.

During the ceremony, Seok said, “There are still many pirates that put at risk the lives of many seafarers in the oceans around the world, and based on the 35 years I have at sea, it fills me with anger and disappointment.”

He further stated, “For the sake of my fellow sailors, and for all the sailors around the world who ride the rough waves, [I ask] for everyone present to become active in the eradication of pirates.”

The captain’s wife, Chi Jin-hee, 59, was in attendance and said, “It seemed like I would never see my husband’s laughing face again when he was lying unconscious in the hospital. It is unbelievable that he came all the way here to receive an award.”

Also present was the Minister of Land Transport and Maritime Affairs, Kwon Do-yeob, and Korean Ambassador to the UK Choo Kyu-ho.

The minister revealed that the IMO had set forth a goal to fight against piracy. He stated, “Presenting Captain Seok with the great award is a symbol for the eradication of piracy.”

Meanwhile, the captain stated, “During the kidnapping and the rescue process, I was just thinking of what I could do and should do.”