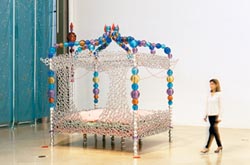 To Sunday: This retrospective of French contemporary artist Jean-Michel Othoniel shows 60 of the artist’s works.

Othoniel is known for his glass works, including a permanent installation at the Palais Royal-Musee du Louvre metro station in Paris that he designed in 2000 for the metro’s centenary.

The show includes two glass sculptures that look like giant beaded necklaces or strands of DNA with symbolic names: “Lacan’s Knot” and “The Great Double Lacan’s Knot.” The names echo psychoanalyst Jacques Lacan’s reference to the Borromean ring, “three connecting rings that completely dismantle if any one of them is severed” and explain “the interrelationship of the real, symbolic and imaginary orders steeped within human desire,” Plateau said.

Deoksugung Annex of the National Museum of Art, Jung District

Ranging from video, installation and multimedia art, the works “demonstrate the artists’ interest in translating into art elements of their everyday lives, their social surroundings and the communication between individuals and societies,” the museum said.

Cuban artist Pardo’s “Bulgogi” is a circular drawing room filled with furniture and decorations that he feels are Korean, based on his contact with the Korean community in Los Angeles. Ironically, this work does not feel very Korean to Koreans.

To Jan. 29: This exhibition features about 110 paintings by hwawon, or court painters, who were responsible for producing paintings for the state as employees of Dohwaseo, the state bureau of painting in the Joseon Dynasty (1392-1910). According to Leeum, it is the first exhibition dedicated to the hwawon, who had a low social status despite their role and the popularity of their work.

The first section features paintings that hwawon created for the court and royal household.

The highlight of the section is “Royal Palanquin Procession,” a nearly 10-meter-long painting depicting a procession of King Gojong and his family in the late 19th century.

The second section features paintings created by hwawon for private patrons, including noblemen and wealthy aristocrats. The section includes paintings of Taoist immortals by Kim Hong-do (1745-after 1806), regarded as one of the greatest masters in Korean art. 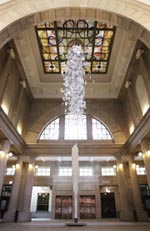 To Feb. 11, 2012: This exhibition celebrates the rebirth of a landmark train station in downtown Seoul as an integrated art and cultural space.

Works by new artists will be added every month until Feb. 11, the official opening of the center, which is expected to host a variety of cultural events.

A performance by artist Yeesockyung, traditional dancer Lee Jeong-hwa and others will be held at 6 p.m. on Dec. 1.