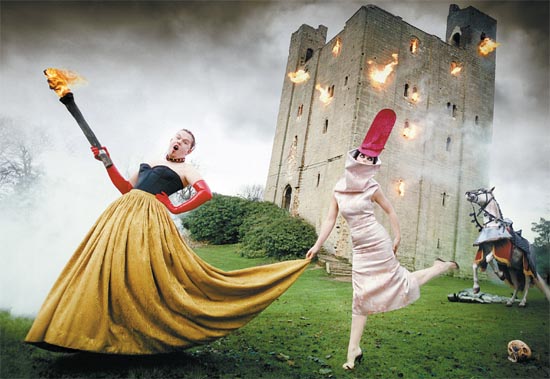 “Celebrities and fashion photography were a means to an end,” the artist said on Monday at a press conference at the Seoul Arts Center in southern Seoul. The 48-year-old was here for the opening of a retrospective of his work at the Hangaram Design Museum, which will run until Feb. 26.

In fact, he seemed resentful of the word “provocative” when used in the context of his art.

“Being provocative is a hollow, shallow approach way to make pictures. It doesn’t last,” he said.

“I don’t set out to shock. I just try to make something beautiful.”

His surreal, highly sexual, sometimes grotesque and over-the-top portraits of the world’s most talked about stars, including Michael Jackson, Madonna, Britney Spears and Paris Hilton made LaChapelle a household name as a fashion and celebrity photographer. But throughout the press event, he expressed a desire to start over.

The artist said he still photographs celebrities he considers friends, including Courtney Love, Amanda Lepore and Lady Gaga, but that he is no longer in “that” business, amidst the “hysteria of celebrity.”

From talking about dropping out of high school and relying on artistic intuition, instead of knowledge, to survive the New York art world, to his experience befriending Andy Warhol and being offered his first professional photography job for Interview magazine, LaChapelle was open and frank in talking about his past and his hopes for the future.

“Along the way, I began to question this idea of worshiping celebrities like a religious figure almost, this idea of putting people on a pedestal and then destroying them, like what we did with Michael Jackson,” he said. “People come up to be a certain level and then we take some perverse pleasure in watching them suffer. That’s the paradox and I’m a part of that world.”

“Death by Hamburger,” left, and “Archangel Michael - And No Message Could Have Been Any Clearer” are also part of the Hangaram exhibition.


After two decades of nonstop work producing candy-colored, glossy images for publications such as Italian Vogue, Vanity Fair, GQ and Rolling Stone, publishing four books and even directing an unsuccessful film titled “Rize,” LaChapelle took refuge in Hawaii, moving there in 2006 to start his own organic farm.

There, the artist said he spent his time praying, meditating and being in nature. After several months, he got a call about doing a gallery show.

“I never thought I would be asked back to that world again. This was a dream for me,” he said. “I thought I was going to be a farmer.”

LaChapelle credited his 2007 solo exhibition “Awakened,” with works centering on themes of religion, water and the universal flood narrative in the Bible, with his artistic transition.

Despite the artist’s wishes, however, the Korean organizers of the retrospective, as well as the local media, seemed disinterested in his new direction. Throughout the hour-long press conference, the majority of questions for LaChapelle concerned the celebrities he worked with in the past.

Showered with questions like “Which celebrity inspired you the most?” and “Which celebrity would you like to work with in the future?” the artist, looking a bit perturbed, smiled and joked, “We really like our celebrities, don’t we?”

The exhibition’s opening seemed to fit this line of thought as well. After the press conference, a row of celebrities, including singer Nam Gyu-ri, actresses Park Si-yeon and Cho Yeo-jung, among others, walked a red carpet to be the first to view the exhibit, as journalists stood outside, huddled in front of a heater for over half an hour, while guards blocked anyone from entering the venue until all of the celebrities had stepped in first.

It remains to be seen whether the Korean public will embrace the artist’s new approach. The artist, at least, seemed hopeful.

“I still feel like I’m beginning, that I’m at the start. I guess that’s a good thing,” LaChapelle said with a laugh.