Tracing back the tear gas

Tracing back the tear gas 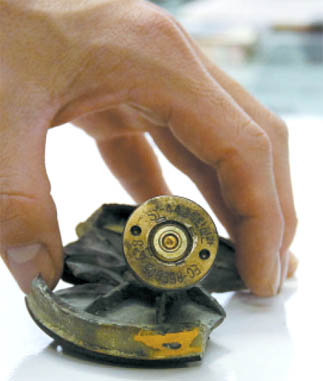 Parts of the tear gas device used by the DLP’s Kim Sun-dong. [YONHAP]

“We will take strong legal action against him by using all possible legal grounds, including a charge of contempt,” said Han Jong-tae, spokesman of the National Assembly.

“It was more than the use of violence against lawmakers,” Han said. “His action amounted to using a lethal weapon inside the chamber. We will take into account all aspects of the incident and take necessary action.”

As lawmakers from the ruling and opposition parties confronted each other inside the main chamber Tuesday before the surprise vote on the FTA called by the ruling Grand National Party, Kim sprayed tear gas at the speaker’s podium, forcing Vice Speaker Chung Ui-hwa and lawmakers to step aside in pain. After a pause and some cleanup, the vote took place and the FTA was ratified.

The tear gas attack inside the legislature was a first for Korean politics.

The GNP said it wanted criminal punishment for Kim. “Kicking him out of the legislature won’t do any good, because there are only a few months left in his term,” said GNP Representative Sohn Beom-kyu, who is on the Assembly’s Special Committee on Ethics. “His action was a clear violation of current laws, so the National Assembly speaker must take the case to the prosecution for an investigation and punish him criminally.”

“I am not afraid of any of that,” Kim said yesterday in a radio interview. “The real terrorists are the GNP and the Lee Myung-bak administration.”

How Kim got his hands on the tear gas canister remains to be answered, as he refused to disclose the source. Debris collected by GNP Representative Cha Myung-jin after the melee helped identify the model. The detonator was marked with the model number SY-44, which was popular with riot police suppressing antidictator demonstrations in the 1970s and 80s.

The SY-44 model tear gas canister has a notorious history in Korea. During an antidictatorship demonstration on June 9, 1987, Yonsei student Lee Han-yeol was hit on the back of his head with an SY-44 and suffered a fatal injury. Lee died on July 5, 1987, and became one of the pro-democracy movement’s martyrs and rallying figures.

It’s not confirmed that Kim used an SY-44, as the police and the manufacturer raised the possibility that his canister could have been illegally modified. The National Police Agency and Samyang Chemical said the SY-44 canisters used by police have a larger diameter than Kim’s.

A police official said yesterday that the police discontinued using the SY-44 model in the 1990s. There are 278 units stored in the police armory, and all of them are to be disposed of next year, the official said, dismissing speculation that Kim’s canister could have come from the police.

Another official said Kim could have kept it from his days as a student activist in the 1980s. The canister used by Kim had the serial number 85E805, indicating that it was produced in 1985, the source said. Kim may have kept a dud canister from a demonstration, he said.

The police said it would open an investigation if the National Assembly makes a request. A Samyang Chemical official said Kim’s canister was not produced by the company because it was the wrong size and the serial number used English letters. He, however, could not answer why the detonator was marked SY-44.

A first-term lawmaker, Kim entered the National Assembly after an April by-election in Suncheon, South Jeolla. The main opposition Democratic Party did not field a candidate to support the liberal alliances, and Kim was nominated by the DLP.

He was a student activist during his years at Korea University in the 1980s and devoted his early career to the labor movement. He joined politics by working for the DLP’s presidential campaign in 1997 and served as the party’s secretary-general in 2006.

A member of the National Assembly’s Foreign Affairs, Trade and Unification Committee, Kim’s months-long lawmaker career was marked by two episodes of violence in the last month.