From pedestal to portable art, jewelry moves out of the box

From pedestal to portable art, jewelry moves out of the box

“Wearable Object” by Dutch artist Lam de Wolf is one of the pieces in the exhibition “Open Mind” at Sungkok Art Museum in central Seoul.

What is jewelry? A rare exhibition of jewelry design at a local museum could help answer this question by demonstrating that jewelry is not always made of gold, silver or precious stones but can be portable art and a form of communication that goes beyond decoration.

The exhibition, “Open Mind,” at Sungkok Art Museum in central Seoul, features more than 300 pieces of jewelry by 64 artists from 18 countries. Most of the pieces on display shatter our notions about the materials used to make jewelry or the body parts around which it can be worn.

One definitive example is the “Wearable Object” by Dutch artist Lam de Wolf. The work covers the body of the wearer from the neck to below the knees and consists of a group of square wood frames covered with textiles of various colors.

De Wolf was quoted by Sungkok as saying that with her “Wearable Object” series, she wanted to “make an artistic and social statement that was deliberately rebellious, antiestablishment, anticapitalist.”

“Wearables are exclusive and challenging when you wear them, you know that you are being looked at, and you can feel your attitude changing,” she said, according to the museum. “They are constructions for the body, but they could be hung on the wall or put on view somewhere.” Among the other works that challenge the common wisdom about where jewelry should be worn on the body is U.K. artist Caroline Broadhead’s nylon “Necklace-veil,” which makes it look as if the wearer’s head is trapped in a translucent folding-paper lantern. Another of her works, “22 in one,” which is made of cotton and nylon, can cover the wearer’s entire arm and can be rolled or folded into a decorative piece when taken off.

“The [jewelry] pieces explored the act of putting on or taking off, the potential for movement and change in appearance when pieces were being worn or not,” Broadhead said in a Sungkok press release. 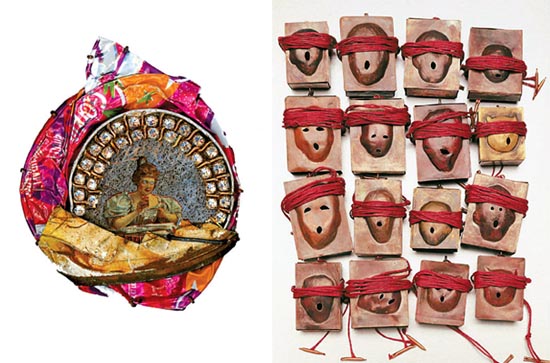 
Compared to the works above, American artist Robert Ebendorf’s “Blind Justice” brooch looks conventional at a first glance, due to its round shape, rhinestones and the vintage painting in the center. But a closer look will reveal that it has as its base a used and flattened can.

Compared to these, some of the works in the exhibition, such as Japanese artist Yoko Izawa’s necklace and rings made of synthetic textiles, are less shocking but their vivid colors and creative structural beauty still attract attention.

“Jewelry helps us express our artistic nature,” said Israeli artist Esther Knobel, who shows jewelry made of various materials. “It is a way of communicating.”

Dutch artist Ruudt Peters, who along with Knobel was present at a press meeting at Sungkok earlier this month, chose to define jewelry as “art works that people can carry with them to various places, instead of hanging on the walls.”

These unconventional pieces do indeed look like fine art works. But the question is, are they wearable?


Many people wear jewelry to make themselves stand out. But when a person wears art jewelry as outlandish as Wolf’s, is there no danger that viewers will see only the work and not the wearer?

“Is it wearable? It is the question that I always receive,” Peters told reporters.

He said that he once actually wore Wolf’s “Wearable Object” to a party and became the center of attention, “like a prince.”

“Of course, I don’t wear jewelry like that anywhere,” he continued. “Sometimes I wear smaller pieces, depending on my mood that day, and on special occasions.

“You can express yourself by wearing big, extraordinary pieces of jewelry at certain special events only after you accept and fully understand the artist’s intention.”

American artist Mike Holmes, who was also at the meeting, said this means that “you can use jewelry as your statement that you and the artist share.” He offered antiwar jewelry as an example.

In this exhibition, Peters shows various works ranging from a necklace of big black lingams, which Lady Gaga might love but ordinary people would probably never dare to wear, to the small “Pneuma” series, which has a broader appeal.

Wang Ki-won, the exhibition curator who is also showing her work here, said, “In contemporary times, jewelry moved beyond its ornamental roots, even beyond its role as a symbol, to become an art form that is no longer associated with any one defining characteristic.”