Carl Zeiss promotes its vision of success in Korea

Carl Zeiss promotes its vision of success in Korea 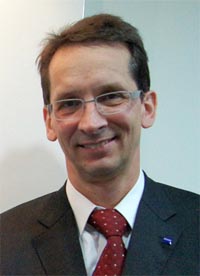 At first glance, the cubicle-lined hallways of Carl Zeiss Korea in Mapo-dong, central Seoul, might look a generic office space, sprinkled with blue accents from the company logo.

But on closer inspection, little details - from stacks of trade magazines about eyeglasses to automotive parts machines dominating a showroom on the lower floor - proclaim the various preoccupations of the German lens powerhouse and its local unit.

To the average consumer, the Carl Zeiss brand might be identifiable with high-end camera lenses and durable eyeglasses. But Carl Zeiss AG has a sprawling business portfolio stemming from its strength in optics, such as semiconductor patterning and medical devices in ophthalmology.

Representing almost all of those business areas, local unit Carl Zeiss Korea is well situated with semiconductor heavyweights like Samsung Electronics and Hynix on its client list. And ophthalmological treatments are the most frequently-undertaken operations in Korea, according to data from the National Health Insurance Corporation revealed this week.

“Vision is equal to quality of life,” said Peter Tiedemann, president of Carl Zeiss Korea, who sat down for an interview with the Korea JoongAng Daily wearing a pair of steel-framed Carl Zeiss glasses. “If you are slowly becoming blind, it’s very hard to enjoy life as you once did.”

Though a global operation with $2.21 billion in incoming orders as of the half-year between October 2010 and March 2011, Carl Zeiss is often cited as an example of mittelstand, a group of technologically-advanced niche companies owned by a family or small group of people that’s increasingly credited as the underpinning of Germany’s economic strength.

In particular, the company’s longevity, now 165 years since its founding in 1846, is a coveted dream for Korea’s small and mid-sized enterprises, of which only 13.4 percent last longer than 20 years, according to the IBK Economic Research Institute.

Tiedemann attributed the longevity of Carl Zeiss to its continuous pipeline of cutting-edge products arising from a focus on R&D and innovation.

“In the end, what people see are the products,” he said. “If you have the latest products with cutting edge technology, you basically build your reputation from those products alone.

“There were times when Zeiss was making products which nobody else can make - for example, in the first World War, the British Army asked people to by Zeiss binoculars in order to get hold of them because the technology was simply that superior.

“However, you cannot rest upon winning the world championships once 50 years ago, you must win them over and over again. For that reason, R&D is crucial.”

“Korea is an advanced market and therefore has very demanding customers,” he said. “Everything has to happen quickly and you must provide cutting-edge technology.”