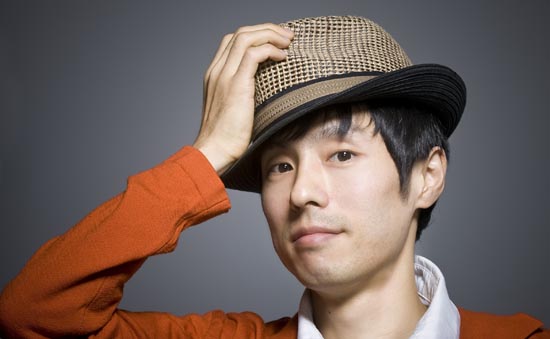 Shim Jae-chun is the winner of the third annual JoongAng Literary Award for his novel, “My Journey to a Perfect Toeic Score.” By Kwon Hyuk-jae


Budding writer Shim Jae-chun has won the third annual JoongAng Literary Award for his novel, “My Journey to a Perfect Toeic Score.”

The book has a broader popular appeal than the previous prize-winning novels. But it almost didn’t win.

The structure of the novel is so simple that the judges debated about whether to give Shim the award, but ultimately agreed that it was the novel’s easy flow and witty humor that made the book so enjoyable.

The novel follows a man who is trying to achieve a perfect score on the Test of English for International Communication. In it, Shim incorporates his own experience from his quest to perfect his English while living and working in Australia at a banana plantation that he later discovered was also growing marijuana. He says that by the time he found out what was going on at the plantation, his English was rapidly improving and so he chose to stay. In the process of studying English, he used some unorthodox methods, which he also includes in the book.

The following are excerpts from the JoongAng Ilbo’s interview with the author.


Q. You must have been moved when you won the award.

A. I’m still a bit shocked.

I worked as a literature reporter for about a year at the Segye Times and quit in October 2008. After that I committed to writing a novel and stuck to it for three years. I feel happy yet weighed down because I wonder how and what should I write about now.

It seems that the more bizarre incidents in the book would have been hard to write about without having experienced something similar yourself. How much of the book is based on your experience?

It’s true, the stories are based on my experiences. I was born in 1977 and attended Sogang University as an economics major back in 1996. After graduating, I wasn’t attached to my job. So in the summer of 2002 I went to Australia to study with only 1 million won ($859) in my pocket. I got a job at a banana plantation but after six months, I started to hate it. So I thoughtlessly decided to be a street performer. I wasn’t a good guitarist nor could I sing, but amazingly the Australian people liked it and gave me money.

With your education, it doesn’t seem like you’d have a hard time getting a job. Why did you try so hard to get a top Toeic score?

You never know what is required. As one of thousands of job applicants, with so much competition, I believed my chances would be better if I got a better score. Also, the emphasis on the Toeic is part of society.

In your novel you describe many methods for studying for the Toeic. Was that your intention?

I think most people know most of the methods I wrote about, so I don’t think it’ll be a huge help. I thought that if people could put aside their stress about the test and just read it as a novel they would enjoy it.

Why did you quit your job as a reporter and become a writer?

At some point I wanted to stop doing what I was doing. After I realized there wasn’t a whole lot for a middle-class person to do to survive, I started writing a book. I thought my experience working as a reporter would help, but it didn’t. Writing an article and writing a book is totally different. It was a challenge to adapt.

How do you feel when people criticize your book for being popular?

It’s embarrassing. I’d like my next book to be something that changes people’s outlook on life and society. I think it would be interesting to write a book that challenges the stereotypes in our society.

Do you have a favorite writer or movie director?