Police up in arms over investigation supervision

Police up in arms over investigation supervision 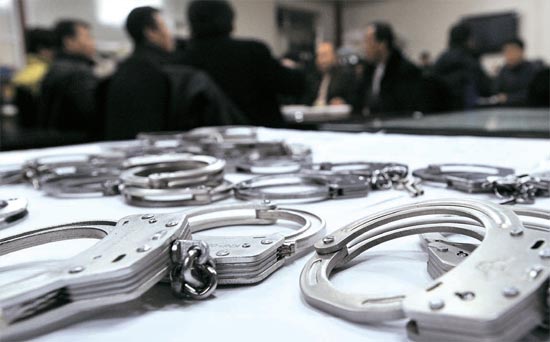 Three days after the Prime Minister’s Office released a bill on prosecutors’ control of criminal investigations by the police, the reaction has been angry among the nation’s finest. Some police are planning to send their handcuffs to the prime minister’s office in protest.

On Wednesday, the Prime Minister’s office disclosed the bill, which was the culmination of six months of squabbling between the prosecution and the police. It said police could begin or close criminal investigations but they would be required to submit reports and evidence to the prosecution if an investigation risked violating a suspect’s human rights.

At a park in Cheongwon County, North Chungcheong, a group of 50 police officers gathered yesterday and threw their handcuffs on the ground. They told reporters they will send the handcuffs to the Prime Minister’s Office in a symbolic gesture of protest.

“We’ll let the government know that the new law is unfair for the investigating units,” a police officer told the JoongAng Ilbo.

After the handcuffs protest, the police officers, academics and legal experts held an all-night debate in which several demands were made. The officers supported recent comments by National Police Agency Commissioner Cho Hyun-oh, who said: “We can’t accept adjustments that will bind investigation units’ hands and feet,” and “If a police investigation violates people’s human and basic rights, it should be restricted by the Criminal Procedure Law, not by a presidential decree.”

Approximately 5,000 police officers nationwide, about 20 percent of the country’s total investigation units, said they were stopping current investigations on the home page of the police’s intranet yesterday.

“It’s only a declaration of intention that doesn’t have any administrative effect,” a spokesman of the National Police Agency told the JoongAng Ilbo. “We can’t stop or punish them.”

In addition, a veteran police officer surnamed Lee who runs an Internet bulletin board called “Crime Hunters,” which deals with investigations of violent crimes, said he would close the 35,000-member Internet space in protest. The police said the Web site is the most important information-sharing space for Korean police and has been operating for more than 11 years.

“If the police can’t run investigations independently, they will be meaningless,” Lee told the JoongAng Ilbo “I’ve thought that being a police officer is my destiny and my calling in life but I feel despondence now.”

Members of the Korea National Police Veteran Association had an emergency meeting with Park Jong-jun, the vice commissioner of the NPA, and other high-ranking officials. The group told Park they will announce a statement of protest against the law and visit the Prime Minister’s Office to express their anger. The Prime Minister’s Office and the prosecution criticized the police, saying protests are not appropriate from government officials. The new law will take effect starting Jan. 1.