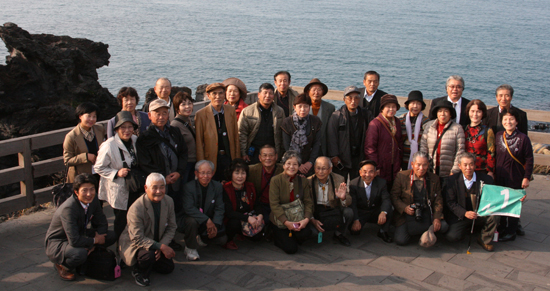 A tourist group of employees from Japan’s National Federation of Agricultural Cooperative Associations takes commemorative pictures at Yongduam (Dragon Head Rock), situated to the north of Jeju City, upon arriving on the island yesterday. Provided by Jeju Convention & Visitors Bureau


Following the recent influx of Chinese tourists to Jeju Island, which was named one of the New7Wonders of Nature earlier this month, tourism from Japan is seeing a boost with nearly 1,000 Japanese visitors set to arrive on the island since yesterday.

“We chose Jeju Island for the natural scenery acknowledged by Unesco and the employees’ interest in Hallyu,” said Yutaka Tanabe, 62, president of the tourism department of Japan’s National Federation of Agricultural Cooperative Associations (NFACA).

Some 996 employees of NFACA will come to Jeju by today as part of the largest group incentive tourism trip organized in Japan and will stay for three days and two nights. Their itinerary includes visits to major sights such as Yongduam (Dragon Head Rock) and the Jeju Folk Museum of Natural History as well as opportunities to trek up Mount Halla and golf.

Ikko, 49, a transgender make-up artist from Japan and an honorary tourism ambassador for Korea since 2009, was ecstatic about the Japanese visitors upon her arrival at Jeju International Airport on Sunday. “I feel new emotions to be able to visit Jeju Island with many fellow Japanese,” she said.

Meanwhile, 70 NFACA employees who had arrived earlier gathered in Yongdam-dong to enjoy views of the sea from Yongduam. They ignored the calls from their tour guide to return to the parking lot.

Some 470 Japanese tourists arrived yesterday, and 500 more are set to arrive today. They are estimated to spend 3.5 billion won ($3.05 million) on traveling expenses, with the local economy seeing a ripple effect amounting to 8.1 billion won.

Jeju officials believe the visit will serve as a catalyst in increasing visitors from Japan, especially in light of the Japanese earthquake in March that dealt a severe blow to the country’s economy. Since July, 15,000 tourists from China visited Jeju through a corporate incentive tourism program, spending 61.8 billion won with an estimated effect of 228.1 billion won on the local economy.

“To enjoy the scenery of Unesco-acknowledged Jeju Island, we changed our tourism location from Hawaii to Jeju Island,” said Saito Mitsutoshi, 51, a NFACA employee. “The employees’ response was positive beyond expectation, and we plan to continue to push for Jeju as our tourist location from now on.”

Han Dong-ju, director general of the Culture, Tourism and Sports Division of the Jeju Provincial Office, said that the number of Japanese tourists in April shrank to 12,460 after the earthquake, but increased to 20,631 in September.