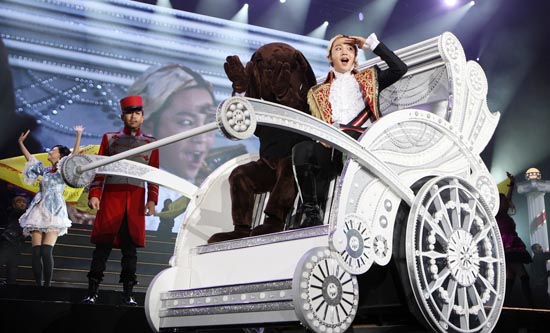 Hallyu star Jang Geun-suk was able to live out his childhood dream of performing at the Tokyo Dome on Saturday night.

After a successful tour of Japan last month, Jang was able to perform for fans in Nagoya, Osaka, Saitama and surrounding areas. His concerts boosted his popularity enough for the actor to take on the “dream stage” as a solo artist.

On Thursday, a day prior to his performance, the K-pop megastar held a press conference at “K-Place” in Tokyo among the Korean press to express his excitement.

“As a musical artist, the Tokyo Dome has tremendous significance and can be thought of as a turning point. Performing there has been my longtime dream. Since middle school I’ve dreamt about it, so now that the dream is becoming reality, I am pumped,” enthused the 24-year-old.

The show was titled “Jang Geun-suk 2011 The Cri Show in Tokyo Dome - The Beginning.”

Cri in the title denotes critical.