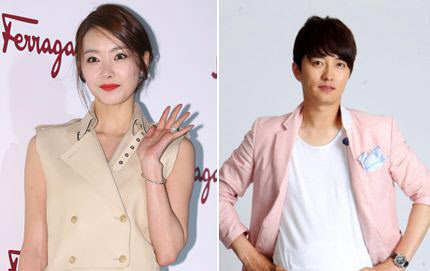 Celebrity couple So Yi-hyun and In Gyo-jin left for their honeymoon in Indonesia yesterday after tying the knot on Saturday in Gangnam District, southern Seoul.

“I’ve known him for 14 years, so he’s more like my brother now,” So said in a press conference held prior to the wedding. “I see him more as my family, than my lover.”

Asked when the couple plan to expand their family, In answered, “later this year.”

So, 30, and In, 34, confirmed earlier this year through MBC’s “Section TV” after announcing their engagement that So was not pregnant.

During the show, which aired in April, So said, “I am not pregnant. In fact, I had a drink last night. If I were pregnant now, I’d be almost due by the time of my wedding.

The newly weds appeared on the SBS program “Aeja’s Older Sister, Minja” (2008) as a couple, and later in the JTBC program “Happy Ending” (2012) as husband and wife.