How safe is world’s nuclear stocks?

How safe is world’s nuclear stocks?

Case 1. A Russian man named Oleg Khinsagov, a resident of the Georgian village of Nogir on the Russian border, was arrested for attempting to sell around 80 grams of highly enriched uranium in the Georgian capital of Tbilisi in January 2006. He and three Georgian accomplices, including a low-ranking Georgian interior ministry official, believed they were selling the material to “a Turk representing a serious Muslim organization,” who was actually a Georgian undercover agent. The evidence suggested that the material was stolen from a large Russian nuclear fuel fabrication plant in the Russian city of Novosibirsk.


Case 2. A nuclear site in South Africa in November 2007, where the security was so robust it was called a fortress, was infiltrated by two groups of armed gunmen in November 2007. The nuclear plant in Pelindaba was the home of hundreds of pounds of weapons grade uranium left over from South Africa’s nuclear weapons program. There were several layers of security for the plant: fences, cameras and locks. The two groups got through them all. It is still unclear why they raided the facility and what materials they got away with. The American newsmagazine show “60 Minutes” described the case as a wake-up call over the vulnerability of nuclear facilities.

According to the Belfer Center for Science and International Affairs at Harvard University’s John F. Kennedy School of Government, these two are only a fraction of the cases disclosed by the International Atomic Energy Agency that prove how vulnerable the world is to theft of nuclear materials.

The International Atomic Energy Agency reported that there were a total of 1,773 crimes regarding nuclear materials reported from around the world as of the end of 2009. There were also 500 cases of theft of highly enriched uranium, which could be used in nuclear weapons.

If lost or stolen nuclear materials fall into the hands of terrorists, it will be a global threat. Mohammed ElBaradei, then the head of the IAEA, said in 2006 that there were clear signs that terrorists had attempted to get their hands on nuclear materials.

“The danger of nuclear terrorism and the need for highly effective nuclear security will be with us as long as nuclear weapons and the materials needed to make them exist on this earth,” said Matthew Bunn, a Harvard Kennedy School professor, responding to an e-mail request from the Korea JoongAng Daily. He referred to numerous cases of inside jobs, covert attacks by outsiders, ingenious theft plans and successful thefts from heavily guarded sites.

“Existing nuclear security measures in many countries are demonstrably insufficient to protect against such adversary capabilities,” he said.

It is known that with only 25 kilograms of highly enriched uranium or 8 kilograms of plutonium, one can make a crude nuclear weapon. 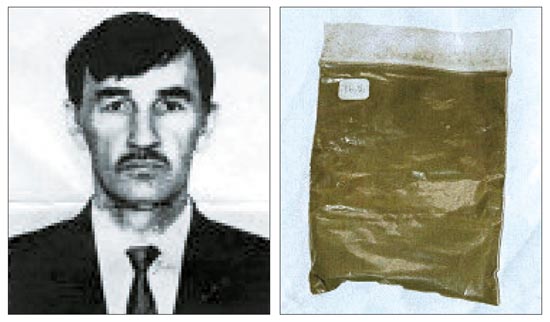 A Russian named Oleg Khinsagov, who was caught attempting to sell highly enriched uranium in Georgia in January 2006. The U.S. authorities concluded that the material was fit for developing a nuclear weapon. Provided by the Georgian Interior Ministry


The Belfer Center describes several regions in Georgia as nuclear black holes where nuclear materials produced by the Soviet Union are traded on the black market without overseeing authorities.

The Khinsagov case really raised fears over nuclear terror. The Atlantic, a U.S. magazine, said that Khinsagov carried his highly enriched uranium in plastic wrapping like it was a sandwich.

The Georgian authorities said the material he tried to sell wasn’t enriched enough to be used as fuel for a nuclear weapon, but the U.S. government’s analysis showed it could. Khinsagov claimed he was in possession of several kilograms of highly enriched uranium.

There are sources of nuclear materials other than Soviet-era supplies. Some smugglers have tried to get nuclear materials from nuclear reactors at research centers with relatively poor security systems compared to military facilities, bribing insiders in the nuclear power generation industry.

Once such materials reach the black market, it’s difficult to reel them back.

“Many groups smuggling nuclear materials are active internationally and they trade goods, whatever they get, as long as they can make a profit,” said Han Choong-hee, Seoul’s deputy negotiator for the nuclear security summit. “They don’t care where those goods are destined to go, and they don’t care if they eventually end up with terrorists or not.”

The U.S. is known to have strict security around nuclear facilities, but observers said that wasn’t the case before the Sept. 11, 2001 terrorist attacks. Before that, lax security at such facilities was pointed out numerous times. The U.S. Sate Department elevated nuclear terrorism on its list of priority security areas.

The U.S. Department of Homeland Security is drafting scenarios to prepare for a terrorist attacks using clandestinely acquired nuclear materials.

Here is one scenario created by the department in April 2005. 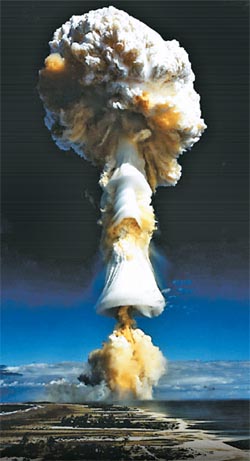 At 9 a.m. on a Tuesday morning, a sports car with a driver and passenger enters a densely populated area in Washington D.C. It is a route the two rehearsed a day earlier, and their final destination is the most densely populated part of the city. Seventy five minutes later, the car arrives at its destination and the passenger pulls a cellphone-shaped device from a pocket.

The two exchange glances. The driver nods and the passenger pushes a button on the device. A nuclear device in the car detonates and most buildings within 1,000 meters are severely damaged. Debris from the explosion causes damage and injuries six kilometers away. Electronic devices within 5 kilometers die due to an electromagnetic pulse. A mushroom cloud rises above Washington and begins to drift east-northeast, exposing people within a distance of a few kilometers to extremely large doses of gamma radiation and/or neutron rays.

The weapon in the scenario is a 10-kiloton, Uranium-235 gun-type nuclear device, assembled from eight components shipped to the U.S. separately and falsely labeled as various types of electronic equipment. It includes two pieces of hardware, two sets of electronics, two separate packages of propellant, a neutron source and the highly enriched uranium.

That scenario, the U.S. Department of Homeland Security says, would trigger the evacuation of 250,000 people.

Countries actively engaged on the world stage like the U.S. are the most likely targets for ordinary terrorists. But for nuclear terrorists geography doesn’t matter, experts say. In 2001, some people were caught with highly enriched uranium in Paris.

In 2003, the Russian commander guarding Russia’s nuclear weapons warned of a possible attempt by Chechen terrorists to acquire nuclear materials.

In Japan, an infamous chemical terrorist incident in 1995 was originally meant to involve nuclear materials. Beginning in the early 1990s, Aum Shinrikyo, a religious cult built on an apocalyptic ideology, recruited scientists and engineers to help the group acquire chemical, biological and nuclear weapons. It chose to build a nuclear weapon and tried to acquire nuclear materials, but couldn’t. Instead it acquired chemical weapons such as the nerve agent sarin, which it used in the 1995 attack on the Tokyo subway system.

During the 1970s, two reactor rods stored at a small research reactor in Kinshasa in Africa vanished and were unaccounted for over the next two decades.

In the late 1990s, an Italian smuggling ring was caught selling one of the rods to Italian undercover law enforcement agents, raising the question of how they obtained it and the whereabouts of the second rod.

Professor Bunn said the technology exists to secure all of the world’s stockpiles of nuclear weapons and materials, except the unknown quantity that may already have been stolen in the past.

“Many of the most important steps could be taken quickly,” he said. “There are many impediments to progress, but we believe a focused, sustained, and high-level effort to overcome them can succeed.”

He said the Nuclear Security Summit to be hosted in Seoul next March will play a significant role in such efforts. He said the summit will also serve Korea’s interests.