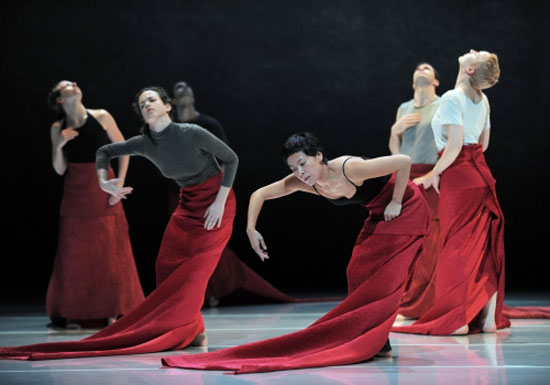 
Chinese-American choreographer Shen Wei is using one of New York’s most cavernous spaces to premiere his latest dance - but for the man behind the opening ceremony of the 2008 Beijing Olympics, nothing is too big.

The Park Avenue Armory in Manhattan, a one-time military drill hall, hosts “Undivided Divided” and by the sound of things anything less than that vast hangar-style roof mightn’t have been able to contain Wei’s creative flair.

“It will be something nobody experienced before and that I myself have never tried before,” Wei told AFP in an interview during a break in final rehearsals for the show.

Performed by the Shen Wei Dance Arts company, “Undivided Divided” will combine dancers painting as they move, digital projections and what is billed as a “wholly immersive experience” in which audiences will be inside the set.

At Monday’s rehearsal, dancers were not even able to go through the entire production since all that paint would have to be cleared up in time for the premiere. Wei, though, seemed to revel in the uncertainty that a partially rehearsed show promises.

“I don’t know what will work,” he said. The performance will be like “the whole journey of life and not just trying to set up a repeat. There’s nothing repeat[ed] in our lives.”

The Chinese-born American has won global fame for his mastery of dance, his bridging of East and West and skill at combining different performance arts.

His role as head choreographer of the Beijing Olympics ceremony, watched by billions on television, no doubt included many rehearsals - and very little of the “will-it-work-or-not” edginess coming to the Armory.

The diminutive maestro’s meticulous side was on view Monday when journalists were allowed to attend a last rehearsal for “Folding,” a dance that premiered in 2000 and which will also be on Tuesday’s program.

Originally created for China’s Guangdong Modern Dance company, “Folding” sees wraith-like figures in long skirts glide across the huge stage in the middle of the Armory, twisting and bending as if blown in the wind.

At one point, Wei, a boyish figure in black jodhpurs and a tight sweater, dashed down from his command point in the house to perform his own brief role in “Folding” before racing back up to his seat to observe the others.

Reflecting afterwards, Wei said there were big differences between dancers in the country of his birth and his new home, where he is a citizen. “In China, how people express themselves is different. The Westerners, they like to ask questions and get the answer immediately. In China they don’t ask questions,” he said.

Asian artists, he said, are “more internal,” whereas his Western colleagues are “more external,” but also “more sharp, more dynamic.”

“Undivided Divided,” along with “Folding” and “Rite of Spring,” opened Tuesday and runs through Dec. 4. AFP