Aid to focus on development, not giveaways

Aid to focus on development, not giveaways 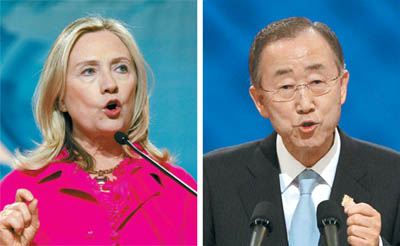 BUSAN - A global forum on aid to developing countries in Busan yesterday unveiled the outline of a declaration to be made today which they hope will be a basis for more effective global aid partnerships.

The political statement at the Fourth High-Level Forum on Aid Effectiveness will also serve as an impetus for fulfilling the Millennium Development Goals, they said.

“We declare a new partnership that we believe will lay the foundation for strong, shared and sustainable growth,” read the statement, which was written by the representatives of the governments and organizations participating in the Busan forum.

The three-day forum, attended by more than 3,000 people from 160 countries, 70 international organizations and 300 civic groups, is scheduled to announce the Busan Declaration at its closing ceremony today.

The statement stressed four principles including a focus on results, reflecting long-standing criticism that international aid, which totaled $539 billion in 2009 alone, has largely been inefficient giveaways by richer countries to poorer.

“I hope that the Busan Forum will make real progress in making more results-oriented cooperation,” President Lee Myung-bak said in a speech during the official opening ceremony of the forum yesterday.

Lee said the ultimate goal of development cooperation is to create an enabling environment and conditions in which partner countries build up their own capacities and achieve self-sustained growth.

“With temporary assistance and short-term programs, we shall find it hard to reach this goal,” he said.

The statement, which also stresses inclusive development partnerships, transparency and accountability, continues the discussion over aid effectiveness that was the focus of the first such forum in Rome in 2003, and is supposed to provide a more efficient framework for giving aid and promoting development.

The forum was held with only four years remaining for the international community to reach the Millennium Development Goals adopted by world leaders in 2000. The 60-point pledge on development includes halving the proportion of people living in extreme poverty by 2015.

According to the Organization of Economic Cooperation of Development, co-organizer of the Busan forum, the number of people living under the poverty line has declined by 400 million since 1990, but there’s still a long way to go to meet the goal, particularly in Africa.

“The Busan Forum, building upon these achievements and lessons, will serve to accelerate the global momentum to achieve the MDGs by 2015 and to discuss a new cooperative framework for effective development cooperation,” Lee said.

Participants in the forum urged countries to continue giving aid despite the weak global economic outlook.

An OECD report published in 2010 predicted that aid to Africa would grow by only 1 percent every year between 2010 and 2013, compared to the average of 12 percent per year over the previous three years, a rate the organization said would be outpaced by population growth on the continent.

“To traditional donors, I say do not let this crisis, short-term austerity, deflect you from your long-term commitment to the world’s poorest people,” he said. “Cutting aid will not balance your budget, but it will hurt the most vulnerable people.”

The leaders also covered the roles required of emerging states and nonstate actors in the field of aid, in response to massive but uncoordinated aid activities by some newcomers like China. U.S. Secretary of State Hillary Clinton called for recipient countries to be wary of blind aid money that, she said may not end up being in their interests. “Be smart shoppers,” Clinton said at a media briefing yesterday. “Be wary of donors who are more interested in extracting your resources than in building your capacity.”

China sent a delegation to the conference of five or six members, according to the organizers. Kevin Rudd, Australian foreign minister, said the forum would provide an opportunity for the Chinese delegation to think about the right direction of its aid.

“It’s good they hear this conference,” Rudd told the Korea JoongAng Daily. “It’s good they consider documents that are before us, because we all are ultimately committed to the principle of aid transparency.”

“I am sure that’s the way China would like to go,” he said.