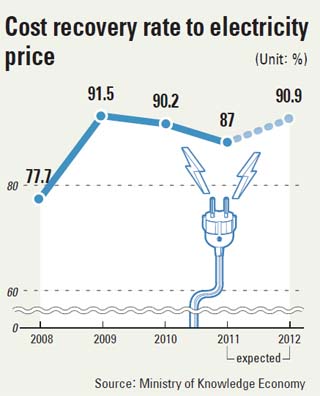 Electricity prices for industrial and educational sectors, as well as office buildings, will be raised by an average of 4.5 percent from Monday, the Ministry of Knowledge Economy said yesterday.

The ministry, which is issuing the second hike in just four months, said that rates for households, small businesses and farms will remain unchanged.

The move, which was widely expected, comes as the government aims to put a lid on rampant energy use this winter due to memories of a nationwide power outage in September, and fears that the current reserves are too small to stave off another crisis when the mercury drops.

But as concern grows that inflation is proving difficult to tamp down, the ministry stressed the new rate increase would not impact consumer prices. However, producer prices will increase by 0.116 percentage points and the average manufacturing cost will move up 0.076 percentage points, it said.

He said that electricity use for heating purposes has surged since 2009, when the country began experiencing unusually low winter temperatures in what is believed to be a result of climate change.

By sector, electricity rates for commercial use, such as that used by office buildings, will rise by an average of 4.5 percent, while charges for industrial use will rise by 6.5 percent.

Prices for educational institutes, including colleges and high schools, will climb 4.5 percent and those for street lamps 6.5 percent.

The average increase of 4.5 percent will allow the government to make up 90.9 percent of production costs, which is an increase from the current 87 percent, it said.

State-run Kepco has been suffering from chronic losses due to not being able to meet its production costs, leading it to complain that Korea’s electricity charges are only half of the OECD average from 2009.

The state power company said it has been long calling for the price hikes, but that the government has had its hands tied by the need to fight inflation, meaning these can only be implemented on a piecemeal basis.

“We will continue to find ways to set up reasonable rates and bring electricity prices to a realistic level in order to prevent the excessive use of power,” the ministry said.

Local companies, already under pressure from the rising cost of raw materials, responded to the government’s announcement with a collective grimace yesterday as they will have to pay the higher rates from next week. “The electricity prices levied on industrial companies are higher in Korea than in other developed nation, which is part of a broader move to strengthen industrial competitiveness,” said an official from the Federation of Korean Industries. According to the official, Korea has seen 11 energy price hikes in as many years. The total cumulative increase amounted to 26.6 percent on average, or 51.2 percent for industrial companies, he added.

Meanwhile, companies warned that the hike in industrial electricity prices would ultimately end up being transferred to consumers, even as they sat down to brainstorm ways of using energy in the workplace more efficiently.

Samsung Electronics, the world’s No. 1 maker of flatscreen TVs, liquid crystal display panels and computer memory chips, said yesterday it will adopt a string of measures to reduce its electricity consumption from Monday.

These include keeping the indoor temperature at its plants below 20 degrees Celsius, in line with government guidelines; limiting use of elevators; and cutting back on the supply of hot water, among other measures.

All of Samsung’s offices, including its headquarters in Seocho, will take part in the initiative, which the company said will result in a 10 percent reduction in daily power usage.

“All Samsung employees will make changes so we can take part in the government’s initiatives to stave off an electricity crisis,” said Yun Jun-hwa, president of Samsung’s management support division.

Hyundai Motor Group will also advise employees working at its factories to switch off idle machines whenever possible during lunch and shift hours. The conglomerate will also create a task force to come up with more ways to save energy.