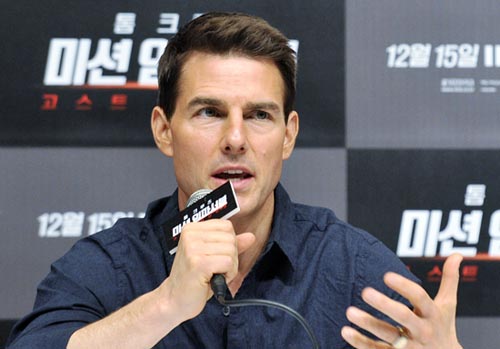 Hollywood superstar Tom Cruise and his “Mission: Impossible - Ghost Protocol” co-star Paula Patton visited Korea to promote the movie that is to be released here on Dec. 15.

Cruise touched down in Korea on Friday in a charted plane at Incheon International Airport to take part in festivities for the movie. This will mark the actor’s fifth visit to Korea, yet the enthusiasm shown by local reporters and fans suggests he is as popular as ever. The actor looked surprised by the throng of supporters and politely waved and signed autographs.

Cruise’s schedule included a press conference at the Grand Hyatt Hotel followed by a red-carpet ceremony at Times Square in Yeongdeungpo District. After the ceremony, Cruise was whisked to the premiere of the movie before making a brief appearance on stage at the Yeongdeungpo CGV Starium Cinema.

“Mission: Impossible - Ghost Protocol” revolves around Cruise’s character, Ethan Hunt, going rogue to clear the name of the organization he works for when it is implicated in a terrorist attack.