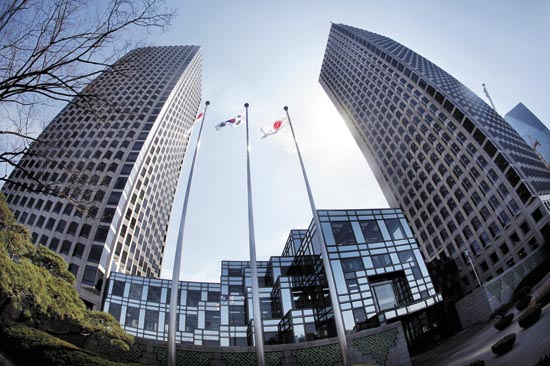 LG Group, headquartered in Yeouido, western Seoul, announced the details of an executive reshuffle over the weekend. By Oh Sang-min


LG Group is determined to shore up its struggling technology-related affiliates with an executive reshuffle that is being implemented incrementally.

The group announced over the weekend that one of the first moves will be to install new CEOs with engineering backgrounds at three of its subsidiaries. The appointments are expected to be made in January.

This is widely seen as a coded warning that they need to work harder to improve their companies’ business performances given the disappointing results that have been posted lately.

While more of the 50-plus affiliates of the country’s fourth-largest business conglomerate are expected to welcome new CEOs in the coming weeks or months, one of the notable exceptions is LG Electronics.

LG Group has interests in a range of industries including but not limited to consumer electronics, chemicals and health care. 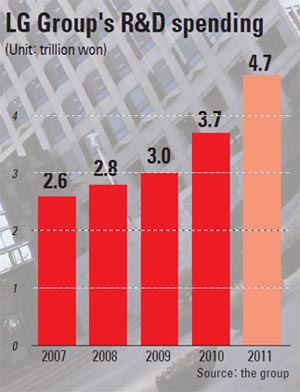 Like his recently promoted peers, Han Sang-beom seems to have a love of engineering hardwired into his DNA. As the soon-to-be CEO of LG Display, the 56-year-old will also be expected to draw on his 30 years with the group to improve its bottom line.

Since joining LG’s semiconductor unit in 1982, Han has served in various positions at the company, most recently as the head of its TV business division.

He earned his doctoral degree in materials engineering at the Stevens Institute of Technology in New Jersey, U.S., after graduating from Yonsei University’s ceramic engineering department in Seoul.

Meanwhile, the new chief executives of LG Innotek and LG Siltron are Lee Ung-beom and Byun Yeong-sam, respectively, both of whom were former executive vice presidents at the same companies.

“The group believes that fostering R&D talent is the key to sustainable growth, and this has been reflected in this reshuffle,” a high-ranking LG official was quoted as saying.

LG Group Chairman Koo Mon-moo has been emphasizing the importance of R&D for some time, but he has become more vocal in recent times as LG Electronics and other key affiliates seen their fortunes wane.

Koo is known for issuing work-related mantras, such as “you can only dethrone the market leader if you develop your core technologies,” and “the root of LG’s competitiveness lies in its R&D activities,” and the recent reshuffle shows him sticking to his guns. 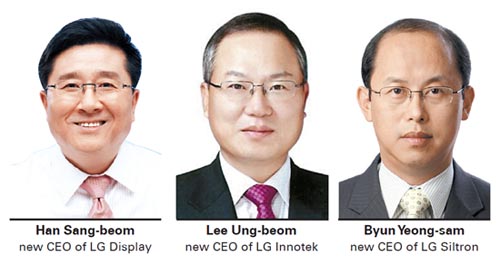 Also of note is the fact that the three new CEOs will retain their executive vice presidents’ titles on their name cards, despite having to assume the weighty responsibilities of a chief executive.

This effectively robs them of a certain level of status that could make it easier to perform their duties, while also serving as a carrot incentivizing them to deliver better results to earn the title.

The move is presumed to have been triggered by the poor results posted by LG Electronics, LG Display and LG Innotek, which ranked among the group’s 20 worse affiliates in terms of business performance in the third quarter, according to the Korea Exchange.

LG Display reported a record quarterly loss in the three months ending in September amid a severe industrial downturn and weak demand for TVs, while LG Innotek also swung to a loss in the same quarter.

Meanwhile, Kwon Young-soo, who has been at the helm of LG Display as its CEO for over four years, has been shifted down a gear as the head of LG Chem’s battery business.

Kwon, who is widely credited with boosting the panel maker’s global ranking and raising its profitability, will be responsible for fostering the department as a hot new business engine.LG Chem supplies lithium-ion batteries for the Chevrolet Volt and Opel Ampera.