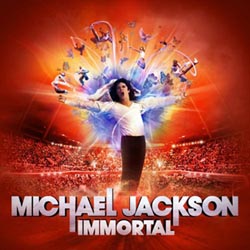 “The Immortal World Tour” is a new Cirque du Soleil extravaganza that pays tribute to the life of the late King of Pop through his rich catalog of hits. Word has it that the show, which will tour the United States beginning in December, is a must-see production.

Listening to the show’s soundtrack will leave you with a “must-see” feeling about the show as well, mainly because you will feel like you have to see the show to put much of the reimagined versions of Jackson’s hits in context.

Without the imagery and plotline of the show, much of the album seems disjointed. Some songs are oddly chopped up, others are spliced together without much finesse, and there are a myriad sound effects, from bullets firing to glass shattering to the whistle of a train to basketballs bouncing, that just sound like noise.

There are a few exceptions. “Dancing Machine” is paired with an electro-groove that gives it a nice updated feel; “I’ll Be There” sounds gorgeous with just Jackson’s voice and a piano; and the a cappella confrontation scene from the “Bad” video fits perfectly into a brief interlude of “State of Shock.”

But just as you’re jamming to that, the song switches to “Beat It,” leaving you with a sense of confusion. Onstage, it probably all makes sense. But without that visual picture, the listening experience is a disappointment.